Home The Future Strange and mysterious predictions for 2015?
UNEXPLAINED MYSTERIES

What strange and mysterious things are predicted to happen in 2015? What predicitons and Prophecies have been made? 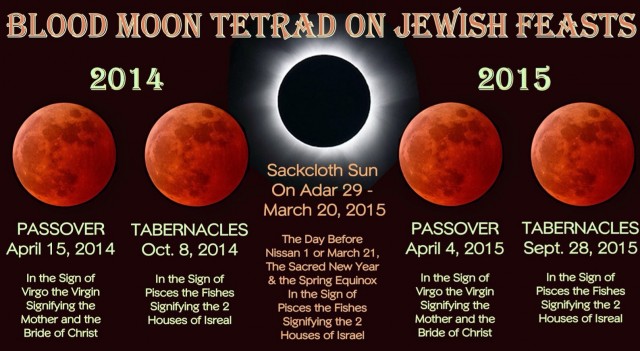 The teaching of the four blood moons has recently captivated the attention of the religious world. This teaching states that, when four consecutive blood moons fall on Jewish feast days, a major event affecting the Jewish people will occur in close proximity to that time.

This phenomenon of four consecutive blood moons coinciding with Jewish feast days has only occurred ten times since 1 AD and only three times since 1492 AD.

The three times since1492 major events affecting the Jewish people have occurred in close proximity to all three of these tetrads as follows:

Now it’s about to happen for a fourth time.

The Four blood moons on Jewish feast, according to NASA, will occur on:

Some prophecy teachers are declaring boldly that this tetrad just ahead signals that something is getting ready to happen, which will change the world forever.

Nostradamus and his prophecies for 2015

Sudden Discoveries in the science of telepathy will make it possible for people to talk to animals. This will lead to an upsurge in vegetarianism because of a ban on eating meat. “The hog will become a brother to man.”

“The kings shall rob the forests, the sky will open, the fields shall be burned by heat,” Nostradamus writes. This is a warning that the destruction of the rain forests will lead to a hole in the ozone layer, exposing Earth to harmful ultraviolet radiation.

Advances in medicine will extend the average human life span to almost 200 years. An 80-year-old will look just like a 50-year-old, Nostradamus claims.

Their fortunes gone in 2015, “the rich shall die many times over,” Nostradamus says.