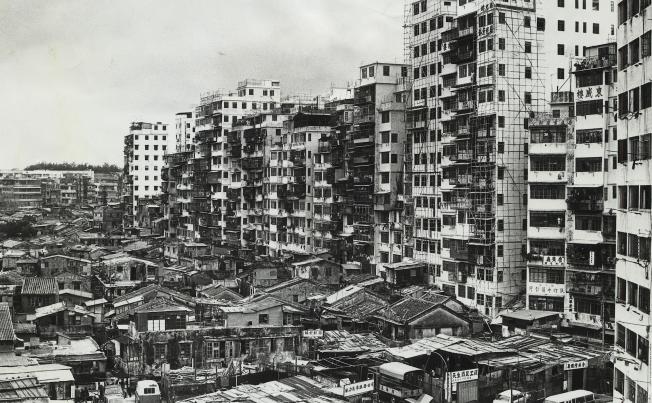 In 1898 China agreed to lease its New territories to Britain for a term of 99 years. However, like any lease, there was fine print. The agreement stated that China would keep control of a small walled-in portion of the Kowloon Peninsula for use as a military installation. In 1899, shortly after the inception of the lease, Britain broke its agreement and took over the Kowloon region, motivating the Chinese officers stationed there to flee. Later that year the British also vacated the peninsula, and while the patch of land remained in their control technically, it was left void of any authority or governance. This forgotten and unruly enclave in Hong Kong became known as the notorious Kowloon Walled City.
In time, this 6.5-acre scrap of earth would become home to more than 40,000 people and by 1987 was regarded as host to the highest population density on Earth. Its citizens lived free from the laws created outside its walls, and Kowloon became a lost world of illegal immigrants and ruling crime lords. The cavernous alleyways and tightly packed structures kept many of the residents in darkness, earning the city the name “Hak Nam” or “City of Darkness.”
Those residing within the overcrowded city made a life of their own, creating businesses without regard to taxation or zoning laws. No health codes regulated the restaurants. Dentists practiced without licenses. One could scarcely swing a dead cat without hitting a casino or a brothel. Inhabitants had to fend for themselves, often wiring their own telephone lines, engineering a latticework of plumbing, and occasionally resorting to digging wells. Although the walls around the city were removed by occupying Japanese forces during World War II, the Chinese who did not already live within Kowloon were often kept out. Tourists were warned by police never to enter the squalor of the opium dens and damp corridors, which fueled the urban lore described by outsiders.

An apartment in Kowloon would make any freshman dorm room look palatial. At the peak of the city’s population — 40,000 souls — each resident had a living area smaller than a typical parking space. Despite the conditions, some residents found the lack of regulations favorable: An unlicensed herbalist paying no taxes and minimal rent could treat patients and earn $2,000 a month.

Amid the anarchy of Kowloon, organization and self-regulation naturally began to arise. The city created schools, kindergartens, bakeries, and butcher shops all bearing a resemblance to the lawful society outside the city’s boundaries. Some residents even made a living cleaning others’ chamber pots every morning.

For decades it remained unresolved whether the city belonged to Hong Kong or to China. For those within Kowloon the debate was of little importance, as it had no bearing on their basic survival. Yet for all these citizens, this world would eventually come to an end.

With a stroke of a pen, Britain’s Prime Minister Margaret Thatcher signed the sovereignty of Hong Kong to the communist Chinese. In 1987 the Chinese government exercised its authority to announce an evacuation of all residents of the Walled City of Kowloon and the future demolition of the city. The Hong Kong government paid $384 million in compensation to the 900 businesses and 10,700 households that would have to resettle.
For some it meant the end of an era of darkness and filth that the outside world had come to know as the “cancer of Kowloon.”
For others, the forced evacuation presented the challenge of building a new life and new livelihood. the unlicensed professionals within the walls of the city would have to develop new job skills and new ways to live. Real estate brokers from inside the walled city had to forsake their old contacts and knowledge, and were left feeling tiny and alone in the sprawling landscape of Hong Kong.

The eviction of the all the residents took years. Over time they accepted the government’s payments and stepped out of the shadows. From 1988 to 1992, the dark corners of the housing units emptied; finally the most stubborn of the city’s population were gathered and forced out by 150 armed police officers.

One particularly recalcitrant old man was said to have stood on the edge of a rooftop threatening to commit suicide if not permitted to stay. In the end, he was convinced to come down. Another local, a surly 62-year-old prostitute, refused the settlement because she was unsatisfied with the new apartment she was issued by the government. Many felt that the compensation they were offered was a pittance compared to the unregulated tax-free haven Kowloon had offered them. Moreover, the announcement of the imminent demolition had prompted the city’s crime lords to seek more lucrative locations elsewhere, making Kowloon’s final few years its most harmonious.
By January of 1993, the city had been emptied and was prepared for demolition. Late one afternoon the sun set for the last time on Kowloon. With the electricity disconnected and the wells covered, the “City of Darkness” disappeared into the shadows of its darkest hour. For the first time the abandoned rooms and alleyways stood silent before the roar of demolition teams ushered in a new era.

The end of Kowloon

Eventually the black and gray tones of the urban outpost were replaced with lush green hues of a city park. Grass and trees now stand on the scrap of earth where thousands of crime lords, prostitutes, bakers, artists, and others had once plied their trades for a tightly knit anarchic society. The dark, buried passages of the Walled City served to inspire writers and artists worldwide, proving once again that the darkest corners of the imagination often have their roots in reality.

Though Kowloon Walled City in Hong Kong was demolished in 1994, it is still believed to have contained the highest population density of humans anywhere on the planet. At only 6.5 acres, anywhere from 33,000 to 50,000 people lived within its walls.

Founded as a Chinese military fort during the mid-1600s, the fort was ceded to the British in 1898. After WWII, China announced its intent to reclaim the Walled City and refugees poured in. By 1947, there were 2000 squatters. The British failed in their attempts to remove them and generally left the Walled City alone.

By the 1950s, with both the Chinese and the British adopting a “hands-off” policy toward Kowloon, it became a haven for crime and drugs and by the end of the decade was virtually ruled by the organized crime syndicate known as Triads. It wasn’t until the early ’80s that crime in Kowloon was under control.

Kowloon saw a rise in construction in the 1960s and ’70s. Residents were free to build their dwellings as they wished, ignoring safety codes. People lived as they would anywhere else, despite the overcrowding and squalor. Deep within the buildings, a variety of small businesses even flourished. 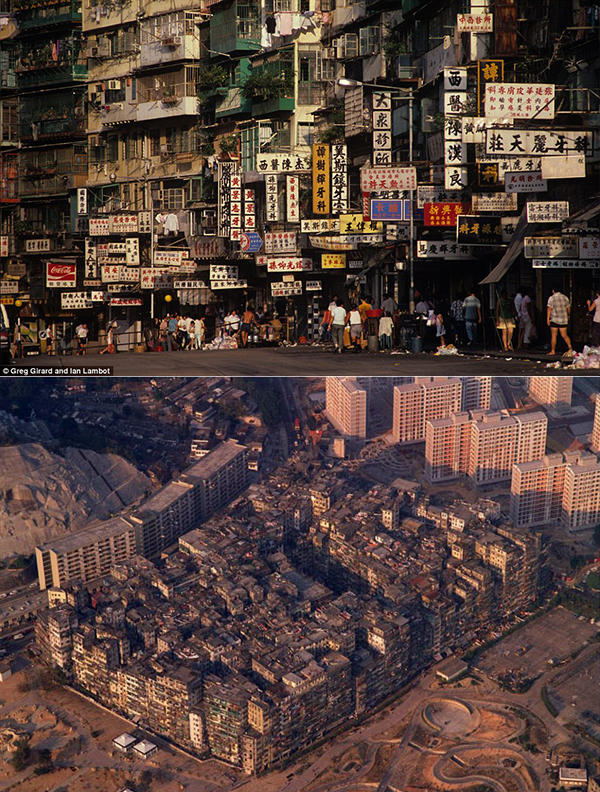 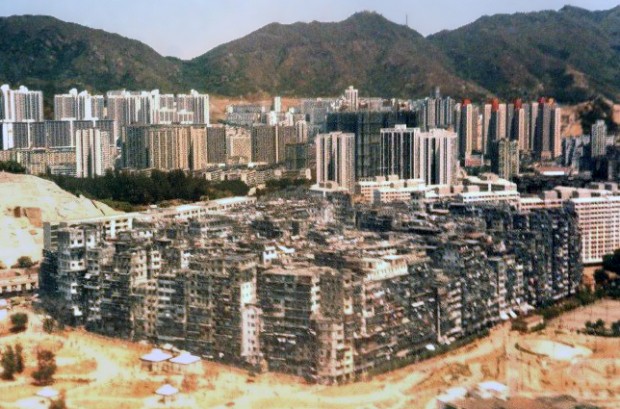 Despite lower crime rates, British and Chinese officials found the living conditions intolerable and plans were made to demolish the buildings. Many residents protested, but the government spent $2.7 billion (Hong Kong dollars) in compensation and evacuations started in 1991. They were completed in 1992.

Construction work on Kowloon Walled City Park started the following month. It was completed in 1995.