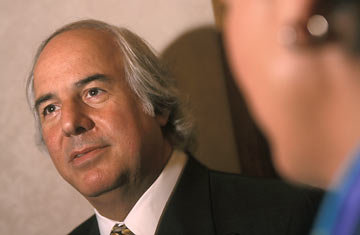 Catch me if you can!

Frank Abagnale is a former cheque con artist, forger and imposter who, for five years in the 1960s, passed bad cheques worth more than $2.5 million in 26 countries. The recent blockbuster film Catch Me If You Can is based on his life. His first experience of fraud was as a youth when he used his father’s Mobil card to buy car parts that he would then sell back to the gas station for a lower price. He did not realise that his father was the one who had to foot the bill and when he was eventually confronted with the fraud, his mother sent him for four months to a juvenile correction facility.

After moving to New York, Frank lived solely on the income of his fraudulent activities. One of his most famous tricks was to print his own account number on fake bank deposit slips so that when clients of the bank deposited money, it would actually go in to his account. By the time the banks realised what had happened, Frank had taken $40,000 and run.

For two years, Abagnale travelled around the world free by masquerading as a Pan Am pilot. He was able to abuse the professional courtesy of other airlines to provide free transport for competing airline pilots if they had to move to another city at short notice. When he was nearly caught leaving a plane, he changed his masquerade to that of a Doctor. He worked as a medical supervisor for 11 months without detection. At other times he worked as a lawyer and a teacher.

He was eventually caught in France and spent six months in prison there. After that he was extradited to Sweden and imprisoned for a further six months. After a successful escape whilst travelling to the United States, he was finally given 12 years in Prison. He escaped from his prison by masquerading as an undercover officer of the Bureau of Prisons. He was once again captured in New York City and returned to jail. After serving only five years of his sentence, the US Federal Government offered him his freedom in return for helping the government against fraud and scam artists without pay.

He currently runs Abagnale and Associates, a financial fraud consultancy company and is a multi-millionaire.