The Winchester Mystery House is a mansion in San Jose, California, which was once the personal residence of Sarah Winchester, the widow of gun magnate William Wirt Winchester. 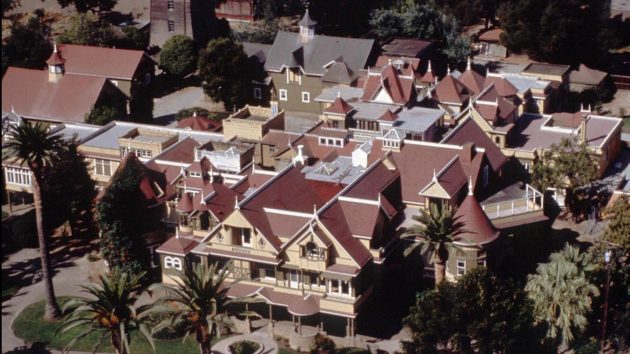 Much of the worlds strangest house has been boarded up since 1922.

But now, a hidden room in a so-called haunted mansion in California is being seen for the first time since.

The Winchester Mystery House has secret passage ways, twisting hallways to nowhere, false doors and a séance room. It has 160 rooms in all, and is known as the “world’s strangest home.”

The caretakers at the mansion have heard footsteps and breathing, and some have reported being victims of pranks.

It was built in the 1800s by Sarah Winchester, the widow of the Winchester rifle fortune.

ABC 7 reports that the preservation team for the home recently opened the new room, which is an attic space. Winchester reportedly boarded up that room after being trapped there during an earthquake in 1906. She thought evil spirits were responsible for the earthquake.

A new room has been discovered and is open to the public at San Jose’s Winchester Mystery House, a Victorian mansion that was home to a widow of the Winchester rifle fortune.

The home’s preservation team recently opened the new room, which is an attic space that has been boarded up since Sarah Winchester died in 1922.

Winchester boarded up the room after the 1906 earthquake because she was trapped in the room and she thought evil spirits were responsible for the quake.

The new room means 161 rooms have been found in the mansion that is a California state landmark, San Jose landmark and is listed on the National Archives of Historic Places.

The shocking story of haunted houses