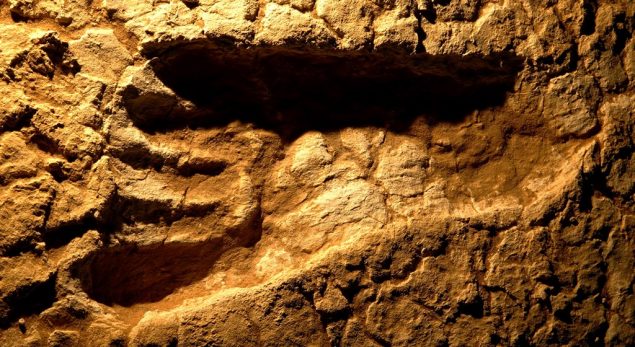 What may be the oldest fossil footprint yet found was discovered in June 1968 by William J. Meister, an amateur fossil collector. If the print is what it appears to be – the impression of a sandaled shoe crushing a trilobite – it would have been made 300 to 600 million years ago and would be sufficient either to overturn all conventionally accepted ideas of human and geological evolution or to prove that a shoe-wearing biped from another world had once visited this planet.

Meister made his potentially disturbing find during a rock and fossil hunting expedition to Antelope spring, 43 miles west of Delta, Utah. He was accompanied by his wife and two daughters, and my Mr. and Mrs. Francis Shape and their two daughters. The party had already discovered several fossils of trilobites when Meister split open a two-inch-thick slab of rock with his hammer and discovered the outrageous print. The rock fell open “like a book,” revealing on one side the footprint of a human with trilobites right in the footprint itself. The other half of the rock slab showed an almost perfect mold of the footprint and fossils. Amazingly the human was wearing a sandal!

Trilobites were small marine invertebrates, the relatives of crabs and shrimps, that flourished for some 320 million years before becoming extinct 280 million years a go. Humans are currently thought to have emerged between 1 and 2 million years ago and to have been wearing well-shaped footwear for no more than a few thousand years.

The sandal that seems to have crushed a living trilobite was 10-1/4 inches long and 3-1/2 inches wide; the heel is indented slightly more than the sole, as a human shoe print would be. Meister took the rock to Melvin Cook, a professor of metallurgy at the University of Utah, who advised him to show the specimen to the university geologists. When Meister was unable to find a geologist willing to examine the print, he went to a local newspaper, The Deseret News. Before long, the find received national publicity.

In a subsequent news conference the curator of the Museum of Earth Science at the University of Utah, James Madsen, said: “There were no men 600 million years ago. Neither were there monkeys or bears or ground sloths to make pseudohuman tracks. What man-thing could possibly have been walking about on this planet before vertebrates even evolved?”

Madsen then went on to say that the fossil must have been formed by a natural process, though of what kind he was unable to suggest. Dr. Jesse Jennings, of the university’s anthropology department, guessed (rather boldly, considering the absence of any supporting evidence) that the print might have been made by one large trilobite coming to rest on three smaller ones.

On July 20, 196, the Antelope Spring site was examined by Dr. Clifford Burdick, a consulting geologist from Tucson, Arizona, who soon found the impression of a child’s foot in a bed of shale. “The impression,” he said, “was about six inches in length with the toes spreading, as if the child had never yet worn shoes, which compress the toes. There does not appear to be much of an arch, and the big toe is not prominent.” The print was shown to two geologists and a paleontologist. One of the geologists agreed that it appeared to be that of a human being, but the paleontologist’s opinion was that no biological agent had been involved. Dr. Burdick stuck to his guns: “The rock chanced to fracture along the front of the toes before the fossil footprint was found. On cross-section the fabric of the rock stands out in fine laminations, or bedding planes. Where the toes, pressed into the soft material, the laminations were bowed downward from the horizontal, indicating a weight that had been pressed into the mud.”

In August 1968 Mr. Dean Bitter, an educator in the Salt Lake City public schools system, claimed to have discovered two more prints of shoes or sandals in the Antelope Springs area. According to Professor Cook, no trilobites were injured by these footfalls, but a small trilobite was found near the prints in the same rock, indicating that the small sea creature and the sandaled wanderer might have been contemporaries.