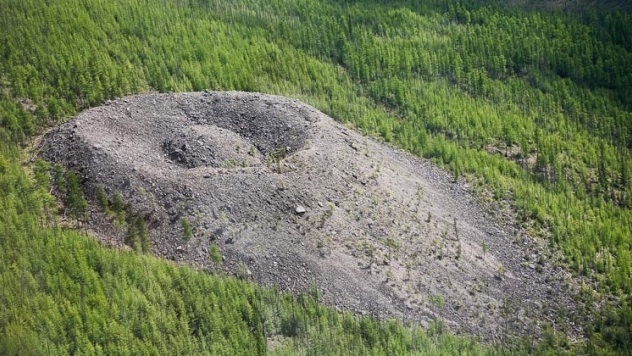 Scientists thought the crater was only between 100 and 500 years old and could be the result of the Tunguska meteorite, which fell in the Krasnoyarsk region in 1908, but whose crater has never been discovered.

In 1949, geologist Vadim Kolpakov set off on an expedition to Siberia, not realizing that he was about to discover one of the strangest unsolved mysteries in the world: the Patomskiy crater. As Kolpakov traveled deep into almost uncharted territory, the local Yakut people warned him not to go on, explaining that there was an evil place deep in the woods that even the animals avoided. They called it the “Fire Eagle Nest” and claimed that people would start to feel unwell near it—and some would simply disappear without a trace.

A man of science, Kolpakov was not put off by these stories. But even he was at a loss to explain what he found deep in the Siberian forests. A giant crater, the size of “a 25-story building,” reared up out of the trees. Up close it resembled a volcano mouth, but Kolpakov knew that there had been no volcanoes in the area for at least a few million years. This crater looked relatively newly formed—Kolpakov estimated it as around 250 years old, a figure supported by later studies of nearby tree growth. Interestingly, the trees also seemed to have undergone a period of accelerated growth similar to that seen in the forests around Chernobyl.

Since the discovery of the crater, there have been many theories as to what (or who) could have created it. Some people, including Kolpakov, have speculated that it might have been formed by a meteorite, although the crater does not resemble any other known meteorite site. Others are convinced that it was indeed a volcano. Many even think that there is a UFO hidden underneath the crater. In 2005, an expedition was launched in the hopes of finding some answers—but then tragedy struck. The leader of the expedition died of a heart attack just a few kilometers away from the site. The locals were convinced it was the “evil” crater that led to his death.

The mysterious crater – also known as the ‘eagle’s nest’ – was discovered 65 years ago in Irkutsk, Siberia, by a Russian geologist.

The cone is 80 metres tall from the lowest point of its base and measures 150 metres wide.

It is thought to be just 250 years old, although estimates differ widely.

Scientists previously suggested it was a slagheap, but now think there were not enough people living in the area to create it.

Some people believe it was made by aliens.

Scientists threw out the idea that the mound was made as the result of a uranium ore explosion as the site has low background radiation.

They have floated the idea that it could have been made by a volcano, but none have been found nearby.

An impact made by a meteorite is the favourite theory but no evidence of fragments has been found.

It is thought there is something with a high iron content over 100metres below the crater, which could be a meteorite.

The crater is ‘alive’ and changes shape – by rising and falling – constantly.

Trees nearby the site are reported to grow abnormally fast