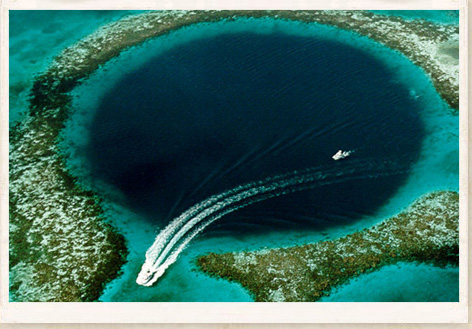 Found on both land and in the ocean throughout the Bahamas and the national waters of Belize are deep circular cavities known as Blue Holes which are often the entrances to cave networks, some of them up to 14 kilometres in length. Divers have reported a vast number of aquatic creatures some of which are still new to science. In addition, they’ve recorded chambers filled with stalactites and stalagmites which only form in dry caves. For the explorers this was proof that at one time, nearly 65,000 years ago, when the world was in the grip of the last major ice age, the sea level of the Bahamas was up to 150 metres lower than it is today. Over time the limestone of the islands was eroded by water and vast cave networks created. When sea levels rose again about 10,000 years ago some of these collapsed inwards and the Blue Holes were formed.