The Oregon Vortex is a strange paranormal location located in Gold Hill, Oregon, in the United States. It consists of a number of interesting effects, which are gravity hill optical illusions, many propose these happen because of the paranormal properties of the area.

A vortex, essentially a whirlpool of force, is the basic form of our universe. From our galaxy, whose vortex form we see as the countless suns of the Milky Way, throughout the gravitational vortex of our solar system, down to the vortex of an atom, the vortex form recurs throughout our world structure. The Phenomena that gives The Oregon Vortex its name are evident throughout the entire area. Nowhere in the circle do you normally stand erect. Inevitably the visitor assumes a posture that inclines toward magnetic north. The corona of The Vortex, as well as the minor vortices, discovered during the continuous study of The Vortex, are among the unique phenomena to be observed here.

As another person, on a level platform, recedes from you towards magnetic south, they appear taller. When they approach you, coming towards magnetic north, they become shorter. This is contrary to the laws of perspective, as we know it, and must be seen to be believed. 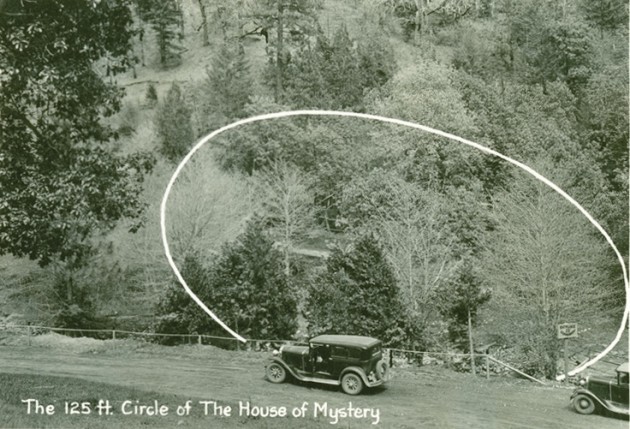