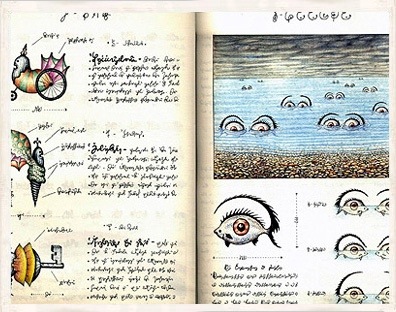 Written between 1976 and 1978 by Luigi Serafini it is best described as the natural history book of a parallel Earth where life is similar but at the same time mind twisting and strange in its alien representation.

Approximately 360 pages in length, it is almost entirely written in code or cipher text. Although the author was still alive as of 2013, he has steadfastly refused to comment whether the language is real or simply an assembly of symbols collated to produce the illusion of meaning. The book is broadly separated into 11 sections that include; Flora and Biology, Fauna and Animals, Bipedal Creatures, Physics and Chemistry, Machines, Biology and Sexuality, Historical and religious, The Language, Social Practices, Entertainment, and finally, Architecture.

There is no doubt that the book is a masterpiece of the imagination that challenges the natural instincts of human perception. The images are vibrant in colour and while clearly impossible in many cases are also strangely believable. The writing is based on the Western style with the words organised from left to right with a clear repetition symbols and a sense of grammar that is consistent with a written language. It has yet to be deciphered although there have been claims the pagination system has been “broken” by Bulgarian linguist Ivan Derzhanski. It is also now quite rare and if you can get an original edition it can cost well over $500. Whether it was intended merely as a weird experiment in art or is a complex code that will one day be deciphered remains to be seen.