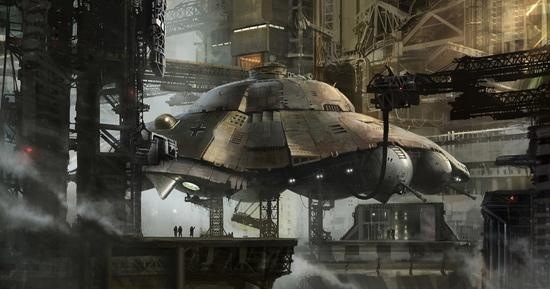 Nazis. UFOs. Put these two words together, and you have one heck of a conspiracy theory. But supposedly, it’s more than just a theory. Because according to a British newspaper, “there is ‘strong evidence’ that a Nazi UFO programme was well advanced.”

The movie Iron Sky riffs off the premise that Nazis created flying saucers. But per the German magazine PM, as reported in The Telegraph, it’s more fact than fiction—evidence exists in an interview given by an eyewitness of the prototype, as well as in the form of UFO sightings during World War II:

The PM report quotes eyewitnesses who believe they saw a flying saucer marked with the Iron Cross of the German military flying low over the Thames in 1944.
At the time the New York Times wrote about a “mysterious flying disc” with photos of the device seen travelling at extremely high speeds over the high-rise buildings. …

Eyewitnesses captured by the Allies after WW2 claimed to have seen the saucer produced in Prague fly on several occasions in early 1945.

As the scientifically minded know, “evidence” is not “proof.” The alleged UFOs were common enough to be given the nickname “foo fighter” (also known by the politically incorrect term “kraut fireballs”). The scientifically minded also know these sightings can be explained by ball lightning, airplane discharge, aviation vertigo and the V-2 rocket.

And as for the eyewitness account, the Nazis were likely developing a new source of propulsion. As we know from the long-range V-2 rocket , the Nazis were forward-thinking when it came to technology. But it’s not likely they managed to succeed.