The people of Helltown, Ohio were helpless when the U.S. National Parks Service swooped in, purchased all their homes, and evacuated the town. The government was going to build a national park. That was in 1974. Today, Helltown is closed off and abandoned … and everyone’s still wondering why, exactly, the government chased everyone out of town. What really happened in Helltown?

Deep in the Northern part of Summit County in Ohio you will find one of the strangest places in America, Helltown.

In the 70’s, Boston Township was the site of a government buyout, and subsequent mass eviction of citizens. The houses were intended to be torn down and the land used for a national park, but the plans never quite manifested.

Today Hellltown is a ghost town with a terrifying secret 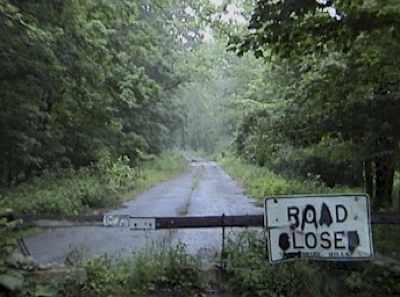 Legends spawned quickly, and who can blame anyone? Driving through the dark, wooded landscape was enough to give you chills even when it was populated, let alone when you have to drive by boarded up houses standing next to the burnt out hulks of other strange buildings.

After environmentalists raised concerns about Ohio’s growing population and the imminent threat to the natural geography, Gerald Ford, who gained the Presidency after Nixon resigned, signed a bill in 1974 that allowed the Parks Service to create a park in the area, and they began purchasing all the property in town. At least, that’s the official story. 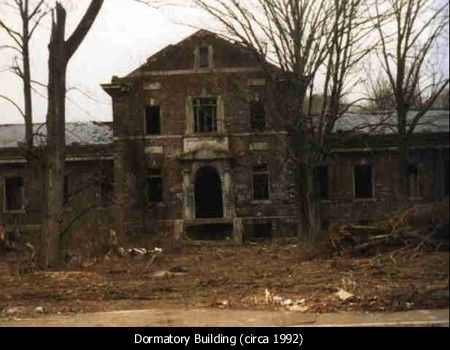 Townspeople tell a somewhat different tale. People living in the region suddenly found Parks officials wandering around on their lawns. When residents didn’t want to sell their homes, the Parks Service put pressure on them to do so. Within months, everyone in town had been pushed out.

The government came in and boarded up houses, posting “no trespassing” signs wherever they tread. Helltown still looks like that today. A few houses along one road were demolished, but the others simply languish. The question is, why?

The number of stories circulating about Helltown is so great that it would be nearly impossible to track them all. In many cases, the stories weave in and out of each other. Here are some of the more well-known legends and the true story behind each of them.

There is a government cover-up to hide the fact that they spilled deadly chemicals in the area. These chemicals have caused bizarre mutations to area residents and their children.

Stories regarding a government conspiracy refer to the area where the chemicals were spilled as either Butane Town, Mutane Town, or Mutant Town – the first two named after the chemical said to have been spilled and the last describing the results of the alleged spill.

Records show that there was never a chemical spill of any type in the area. These stories were most likely attempts to explain the various US Government signs on the abandoned buildings.

“The local cemetery is haunted by a ghost that sits on a bench and stares blankly into creation.”

Interestingly, the ghost in this cemetery is almost always described in this precise way, with no further details offered. Because there is so little descriptive information about the ghost, it is nearly impossible to determine a story or identity that might accompany it. The home of this alleged spirit is Boston Cemetery, which – interestingly – has no bench.

“The trees in the cemetery move.”

This legend is another one that appears verbatim on a large number of websites, but again, no additional information is given. One e-mail The Ghosts of Ohio received claimed that members of a satanic cult caused the trees move in order to protect the cult’s secrets. We found nothing of substance to support this claim.

Boston Cemetery contains the graves of a large number of children who were all killed in a bus accident.

As with any cemetery, there are children’s graves in Boston Cemetery, but none is the result of a bus crash. This legend was likely started in an attempt to tie the cemetery to the legend of the school bus..

Local churches are used as a cover for cults:

The church is never open for mass, no matter what time you go there.

There is an evil man who lives in the basement and guards the church against outsiders. He refuses to let people see his face and hides if you try to look at him.

“A group of devil worshippers own the church.”

“There are always candles burning in the church, even at night.”

“The church has upsidedown [sic] crosses all over it.”

There are, in fact, two churches to which these legends refer: Boston Community and Mother of Sorrows. Of the two, Boston Community Church is the one that is more often the focus of the legends, particularly the ones involving the “man in the basement.”

Check out the haunted hospital 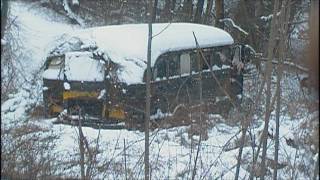 The bus is still there, although all the seats have been removed. Sometimes the bus fills up with the ghosts of the murdered children, each one sitting in his/her ghostly seat. Sometimes the ghost of a man (“the killer”) smoking a cigarette is seen at the back of the bus. Other times, only the children’s screams and/or laughter are heard coming from inside the bus.

Locals have attempted to tow the “cursed” bus away, but each time they have tried, some mishap occurred that often resulted in injury or death. Eventually, they decided to leave the bus there.

Prior to the 1974 buyout of the town, a family bought a house that was in dire need of repairs. Since the house was not in livable condition, the family needed a temporary place to stay nearby while they made the repairs. They decided to bring an old school bus onto the property and live in it until repairs were completed. In order to have more living space, they removed the seats from the bus. When the government bought the property, the family had no use for the old bus and it was left behind.

The local government has since had the bus removed, since area residents have registered complaints about the large number of people searching the woods at night looking for the “cursed bus.”

Note: This is also why there are abandoned cars, farm equipment, etc. scattered across the area. In most cases, non-working machinery was simply left behind.