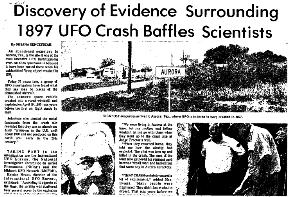 Although it would be five years or so before the Wright brothers would make the first controlled aircraft flight, this pre-flight era would become known as the “great airship” period in Ufology. Whereas many of today’s unexplained UFO sightings are assigned to conventional flying craft, that luxury did not exist in 1897. Anything flying that was not a bird or blimp was a UFO.

About 6 o’clock one morning the early risers of Aurora were astonished at the sudden appearance of an airship which has been sailing around the country. It was traveling due north and much nearer the earth than before. Evidently some of the machinery was out of order, for it was making a speed of only ten or twelve miles an hour, and gradually settling toward the earth.