There were a number of mysteries that took over the TV during the ’90s; and those mysteries still baffle us to this day. Kidnappings, murders, and claims of UFO and alien sightings — no one can argue that the ’90s were uneventful. While we might not have understood them as kids, these stories certainly are kind of creepy now. The stories might be old, and the evidence might be telling; but regardless, these mysteries remain unsolved, unanswered, often incredibly sad, and totally weird,

The Abduction Of Amber Hagerman 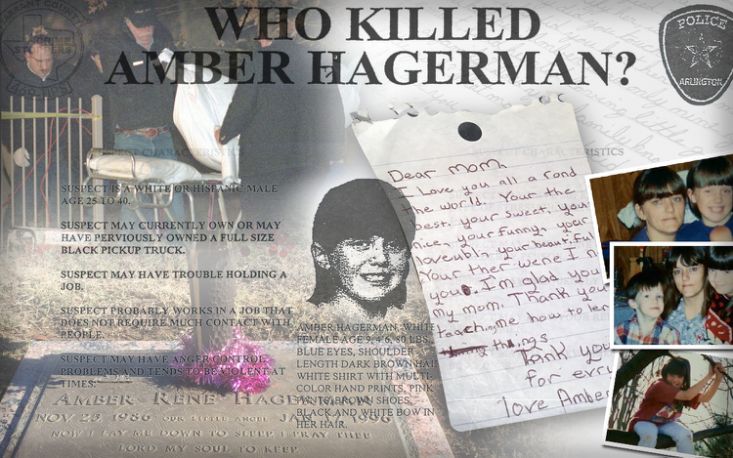 On the afternoon of January 13, 1996, Amber Hagerman, 9, and her five-year-old brother, Ricky, pedaled their bicycles to an abandoned grocery store in Arlington, Texas. Minutes later, Ricky turned to head back home, about a block away.

Jim Kevil, a 78-year-old retiree, stood in his backyard not far away. “I saw [Amber] riding up and down,” he said later. “She was by herself. I saw this pickup. He pulled up, jumped out and grabbed her. When she screamed, I figured the police ought to know about it, so I called them.” Kevil described the truck as being dark, possibly black. The abductor was white or Hispanic. Police arrived within a minute or two. By that time, Jimmie Whitson, Amber’s grandfather, was on his way to the locale of the former Winn-Dixie store to check on her. (When Ricky had arrived back home without Amber, Whitson had grown worried.) By the time he arrived, cops were there.

Experts say that stranger abductions are rare. They are also among the most difficult cases to solve. Even with an eyewitness, investigators were stymied. They theorized that it was a crime of opportunity, that the kidnapper saw Amber alone and impulsively decided to snatch her. The vacant lot where children liked to play was on East Abram Street, not far from a huge General Motors plant. From the beginning, cops felt that the abductor was almost certainly familiar with the area. Local police were joined by volunteers and the FBI in the massive search that followed.

A truck similar to that of the kidnapper had been spotted outside a nearby laundromat before Amber was taken, but investigators never located the vehicle. Four days later, a man was walking his dog near the Forest Hill Apartments, just a few miles from where the child had been snatched. At the bottom of a creek bed, he saw a child’s body. Amber Hagerman had been found. An autopsy determined that Amber had been held alive for two days. During that time she was sexually assaulted. Arlington police and the FBI formed a task force to search for the killer. Investigators followed up thousands of leads, but none turned up the murderer. By 1999, the task force had been disbanded and the case had gone cold. The killer has gone undetected now for eleven years. Arlington detective Jim Ford recently said, “There would be nothing more important or rewarding than seeing this case get resolved because [it] is as bad as they get.” Shortly after Amber went missing, a caller to a Dallas radio station asked a simple question: why can’t law enforcement team with the media to quickly provide information to the public when a child is abducted? The idea caught on, and the Amber Alert was born.

It began locally as the Dallas Amber Alert. Then it became a state-wide program and finally went national. Since its formation, the Amber Alert is credited with the rescue of more than three hundred missing and abducted children. Glenda Whitson, Amber’s grandmother, prays that the killer will be caught. However, she’s not optimistic. “[Police] really don’t have much to go on,” she said. “A few fibers they found on her body, they tell us. They’re still working on it, and they call us now and then. They say they’ll never give up. After ten years, you lose hope that they’ll ever find him, but I still have a little bit of hope.” A psychological profile was issued by police a few weeks after the murder. Unfortunately, it was a generic rehash of profiles released after many such crimes. The killer was at least 25, cops said.

He lived or worked near the scene of the crime. Since Amber was alive for two days after she was kidnapped, the killer had to have had some place to keep the child. Something probably caused him to snap, police said. Since 1996, a killer has roamed free. Did he keep trophies of his victim so he can relive his crime? Has he killed again? Is he free or incarcerated? Amber Hagerman deserves justice and her killer deserves a Texas send-off to Hell.