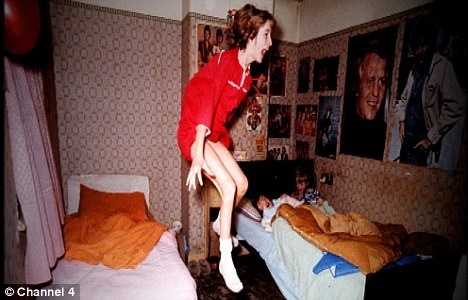 The rasping male voice sent a chill through the room. Hauntingly, it delivered a message from beyond the grave, describing in graphic detail the moment of death.

‘Just before I died, I went blind, and then I had an ’aemorrhage and I fell asleep and I died in the chair in the corner downstairs.’
The eerie voice — which can still be heard on audio tapes today — is purportedly that of Bill Wilkins. The recording was made in Enfield, North London, in the Seventies, several years after his death. 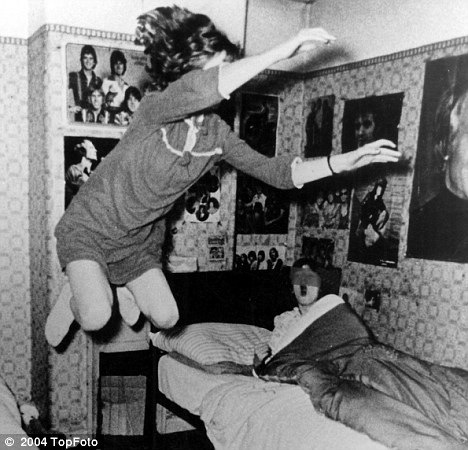 Most horrifying of all, however, was that the voice was coming from the body of an 11-year-old girl, Janet Hodgson. She appeared to be possessed. It could have been a scene from the film The Exorcist — but it was real.
What was going on? This was the case of the Enfield Poltergeist, which held the nation spellbound 30 years ago, puzzling policemen, psychics, experts in the occult and hardened reporters alike.

It involved levitation, furniture being moved through the air, and flying objects swirling towards witnesses. There were cold breezes, physical assaults, graffiti, water appearing on the floor, and even claims of matches spontaneously bursting into flame. 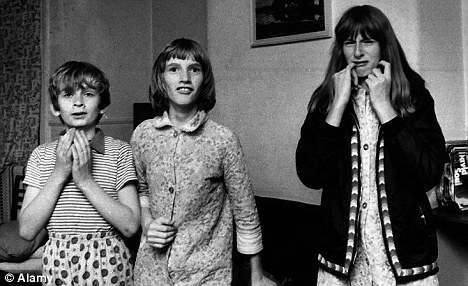 Just what happened in Enfield, then, all those years ago? Where are the Hodgsons now, and have they escaped their ghosts? Could they have made the whole episode up? And who lives at 284 Green Street now?
The story, as the Hodgson family told it, begins in 1977. Peggy Hodgson was unusual, at the time, in that she was a single mother to four children — Margaret, 12, Janet, 11, Johnny, ten, and Billy, seven — having split from their father.

It was the evening of August 30, 1977, and Mrs Hodgson was keen to get her children into bed. She heard Janet complaining from upstairs that her and her brothers’ beds were wobbling.

Mrs Hodgson told her daughter to stop mucking around. The following evening, however, there was an altogether more bizarre disturbance.
Mrs Hodgson heard a crash from upstairs. Cross, she went to tell her children to settle down.

Entering their bedroom, with Janet’s Starsky & Hutch posters on the wall, Mrs Hodgson saw the chest of drawers move. She pushed it back, but found that it was being propelled towards the door by an invisible force.
It seemed as if some supernatural presence was trying to trap the family in the room with the heavy oak chest.

Many years later, Janet would tell a Channel 4 documentary: ‘It started in a back bedroom, the chest of drawers moved, and you could hear shuffling. Mum said: “I want you to pack it in.”

‘We told her what was going on, and she came to see it for herself. She saw the chest of drawers moving. When she tried to push it back, she couldn’t.’
Janet’s sister Margaret explained how the activity increased.

‘There were strange little noises in the house, you couldn’t make out what was going on. None of us got slept.