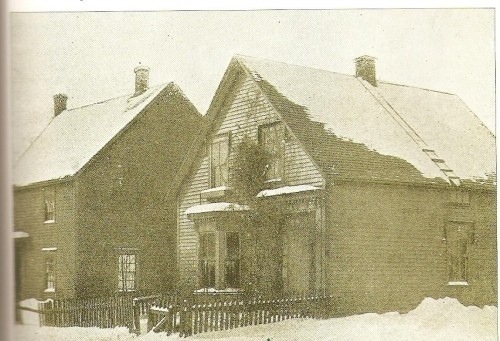 The year was 1878. A young Esther Cox, barely eighteen years old, is brutally attacked and almost raped by a friend of the family. Shortly after, the beginning of a cruel and dangerous poltergeist attack was witnessed and recorded by many. This is the Amherst Poltergeist case.

The Esther Cox case is a very peculiar case. It’s a case filled with mysterious paranormal phenomena, deep psychological trauma and what a person’s state of mind under severe duress and mental instability can do.

Esther shared a house with her sister Olive. Olive was married to Daniel Teed and lived together with their two children, Esther’s two siblings and Daniel’s brother. A crowded home to say the least. Although it had plenty of rooms, the house would at times become even more crowded, as Olive and Daniel rented out some of the rooms for extra cash. It wasn’t until after the attempted rape of Esther, that the residents of the house began to see and hear strange phenomena.

Esther had suffered minor cuts and bruises from the attack, but this was nothing compared to the psychological scarring it had left. And these were some deep scars. Shortly after her attack, she began developing severe fevers which at times were accompanied by strong seizures. This was unusual for Esther, as she was always a healthy child. One night, Esther was getting in bed, a bed she’d share with her sister Jennie. It was late at night and Olive and Daniel were in the living room, talking away into the night. A sudden deafening scream made them jump to their feet. Busting into the room, they encountered the terrified sisters cowering in the corner. Apparently, both were witnesses to strange movements underneath the blankets.

The girls told how there seemed to be something crawling underneath the blankets. It was big enough to scare them out of the bed. Everyone assumed that it was a mouse that was trapped in the sheets, but thorough searches revealed nothing.
The same deafening scream was heard the following night. When Olive and Daniel bust into the room again, they saw an old box, which was full of strips of fabric, strewn across the floor. Apparently there was a strange noise emanating from the box. A loud noice which had awoken the girls. When Esther reached underneath their bed to pull out the box, it jumped by itself and landed in the middle of the room. Taken aback, the girls saw the box take a second leap up in the air and spilling its contents. The frightened girls were certain that something had tossed the box up in the air. It was the same thing that had been making the sounds from underneath the bed.

By the third night in the chain of events; Esther decides to turn in for the night. She had been feeling a little under-the-weather that day and needed the rest. Hours after laying down, her sister also decides to turn in for the night. She gets in bed and within minutes, Esther jumps out of bed screaming bloody murder. Jennie snaps out of drowsiness and finds Esther in the middle of the room, eyes bulging out and skin swollen and red-hot. Esther is screaming:

“Why is this happening to me? I’m dying!”

Esther is hit with a wave of convulsions that drop her to the floor. Again, Olive and Daniel come into the room and find Esther convulsing on the floor. While attempting to help her, four thunderous claps resonate throughout the house. Shaking and rattling everything in it. Everyone is paralyzed with fear. Immediately after the sounds stopped, Esther stops shaking and falls into a deep, deep sleep. They all stand around the bed. Confused and terrified. Esther’s skin is returning to its regular color. The swelling stopped.

Esther remains in bed for the next three days. Recuperating from the fever that had severely affected her a few nights ago. During this time, it was noted that no strange outbursts where seen or heard throughout the house. A day later, the exact same of events occurred. The four thunderous claps had once again, made everyone jump.

Confused and concerned, Olive and Daniel contacted Dr. Carritte. A local and trusted doctor. Upon his arrival, the events surrounding Esther begin to escalate.

Dr. Carritte made it a point to document the case from the beginning. His first night there, he witnessed things that would be indicative of high-strangeness. That night in the Teed residence, Dr. Carritte jotted down in his journal, a strange incident in which Esther’s pillow moved from underneath her head. Pulled by an unseen force. In his notes, Dr. Carritte mentions that Esther’s hands where in plain sight and that there was no visible form of trickery that could have moved the pillow from under the girl’s head. As the night gets darker, so do the events.

Dr. Carritte wrote down of loud sounds and banging emanating from underneath her bed. Again, checking for any signs of trickery, Dr. Carritte was at a loss for an explanation. Moments later, he heard a sound which sounded to him like a metal piece scraping plaster. What he wrote down next changes the tone of the case. A few feet above Esther’s bed, on the plastered wall, he watched as letters begin etching themselves. Forming letters that are a foot long, the message was clear and ominous:

While the doctor stands in disbelief. Esther lays motionless, in a deep sleep.

The frightening ordeal wasn’t enough to keep the doctor away. He had returned the very next day, only to fill his journal with all kinds of random unexplained events. Potatoes being hurled across the room by unseen hands, spontaneous fires erupting throughout the house and even the thunderous claps had returned. This time, they were heard coming from the roof of the house.
As the days pass, the paranormal events continued. Knives and forks suddenly flew across the room at high speeds. Jamming themselves into the walls at times. Lit matches were said to materialize out of thin air and land on the beds. Furniture was moved and tossed around when no one was in the room. Often times, heavy drawers slamming up against the walls. For Esther, the poltergeist activity turned from annoying, to life-threatening.

Witnesses claim to have heard the sound of a heavy slap, only to see welts rising from Esther’s face. Turning her whole side of a cheek red in seconds. Something was now physically harming Esther. Feeling guilt, Esther decided to move out of the crowded house and into a more comfortable one by asking her eldest sister permission to move in. While staying miles away, no strange phenomena was reported at either location. It seemed that whatever was frightening the Teed’s, it had vanished as quickly as it had manifested.

After feeling that everything was OK, that everything had returned to normalcy, Esther Cox returns to Amherst. One Sunday, Esther decided to attend mass. Loud knocks and rappings kept interrupting the otherwise peaceful Sunday sermon. As the preacher continued to carrie a higher-pitched sermon over the noises, Esther began to feel more and more embarrassed. All eyes were on her. Everyone in town knew about the strange goings-on inside the Teed house. Esther trying to save face, gets up and excuses herself from the mass. Soon after, the noises ceased and the mass continued in peace.

Esther’s welcoming back into the Teed house was a bitter one. The activities continued and even escalated to a more sinister level. One of the neighbors had gone over to the Teed’s to hang out. The neighbor, a young man, was playing with a pocket-knife when it was suddenly ripped-off his hands and flew straight into Esther’s back. Piercing its blade deep into her back. This was the last straw. The family knew that whatever this force was, it wanted Esther to itself. Just like the message the Dr. Carritte saw manifesting before him.

Esther moved out the house –since she believed that it was the source of her troubles– and moved into the home of a friend of the family. Not long after moving in, the barn caught fire and was destroyed. The friend, believed that Esther was behind the arson and had her arrested. Esther was convicted of Arson and sentenced to four months in prison. She ended up serving only 30 days.
After she was released from prison, Esther’s life returned to normal. The poltergeist seemed to have vanished for good.