Home Paranormal The Ballechin House, the most haunted place in Scotland
UNEXPLAINED MYSTERIES 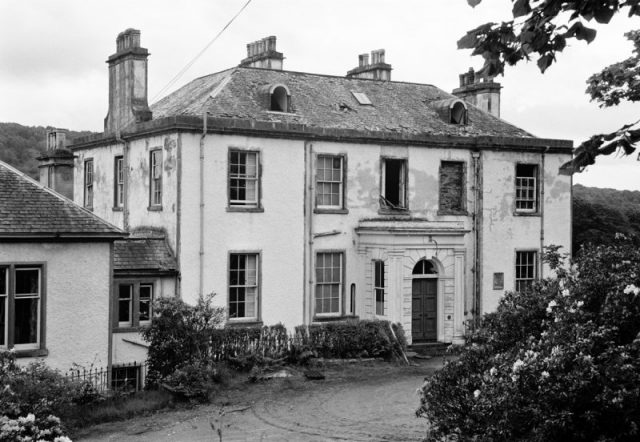 Ballechin House was built in 1806 on the site of an old manor house which had been owned by the Stuart Family for over three centuries. In 1806 Robert Stuart was born in the new house.

In 1825, at the age of 19, he went to India to seek his fortune with the East India Company and returned in 1850 after reaching the rank of Major, returning to Ballechin, which he had inherited 16 years previously in 1834. As the house had been let to tenants he lived in a small cottage in the grounds until their lease expired.

The local population regarded him as a bit of an eccentric. He was deeply religious but after 25 years service in India had added various oriental beliefs to his convictions, including the idea of transmigration of the soul. He vowed that when he died he would return to Ballechin in the body of his favourite black spaniel. He scorned the company of humans, preferring dogs, and he had 14 of them in the house. The only person with whom he associated was Sarah, his housekeeper, who died mysteriously at the age of 27, in 1873. It was not lost to local gossip that she had died in his bed, as opposed to the servants’ quarters, where housekeepers normally slept. It was this master bedroom that was to become the most haunted room in the house.

Major Stuart died in 1874 and was buried at Logierait churchyard in the grave next to Sarah. His nephew, John Stuart, who took over Ballechin House, shot all the dogs, starting with the black spaniel, almost certainly to forestall Robert Stuart in his declared intention of returning to the house after his death. John Stuart was a devout Roman Catholic. His first task was to convert the cottage in the grounds into a retreat for nuns. Robert Stuart’s sister, Isabella, had become a nun, taking the name of Sister Frances Helen. She died at a convent on 23rd February, 1880, and was to become a regular visitor to the house after her death.

The first sign of a haunting occurred shortly after Robert Stuart’s death. John Stuart’s wife, having just moved into Ballechin, was busy in the Major’s old study one day when she noticed a strong smell of dogs in the room. Whilst she was opening the window to get rids of the “foul smell” she felt a nudge on her leg. Looking down she could see no animal but she described it as if an invisible dog had rubbed itself against her. This was to be followed a few days later by the sounds of knocking and also the distinct sound of a gun being fired. Quarrelling was to be heard later but the words were indistinct.

By the end of the 1870’s the situation had become that bad that the Stuart’s governess left. A Jesuit priest, Father Hayden, who often stayed at Ballechin, heard the sounds on many occasions, including the sounds of screams. On one occasion he heard the sound of what appeared to be a dog banging on his bedroom door but when he opened the door to investigate there was nothing there. Later on Father Hayden was to meet the former governess, purely by chance, and upon discussing Ballechin learned that he had slept in the two worst rooms of the house.

In January, 1895, John Stuart was in the Major’s old study one day, talking to his agent about estate business, when they were disturbed by three loud thudding sounds which were heard coming from inside the room. This must have been an omen because a short while later John Stuart died in London after being run over by a cab.

In 1896 the house was leased to a family for a period of twelve months, the successor to John Stuart being an Army captain and having no real interest in the estate. The family were to live there for a mere 11 weeks before being driven out, willingly forfeiting over nine months paid rent, having heard the knockings, thumping and quarrelling. Various members of the family were to experience the sight of a ghost, dressed in a silk dress, and hear the sounds of a silky dress proceeding down the corridors. Bedclothes were pulled off beds and the whole family were awakened several times by loud banging noises. One of the daughters of the family was terrified one night when she heard the sound of limping footsteps walking round her bed. Her screams brought several other members of the family to her room and they too were able to verify that there was “something” there in the room. The girl was occupying the room in which the young housekeeper had died so mysteriously in 1873. It is interesting to note that Major Stuart had returned from India with a permanent leg injury as a result of wounds sustained during his active service.

In 1896 the Marquis of Bute, a keen student of psychic phenomena, rented Ballechin House and asked two psychic investigators, Colonel Lemesurier Taylor and Miss Goodrich-Speer, to carry out the investigation. The couple moved into Ballechin on 3rd February, 1897, with a total group of 35 people. On the first morning after their arrival they reported “a loud clanging noise” which had been heard throughout the house at frequent intervals over a period of two hours. The muffled sound of voices had been heard and also the sound of somebody walking in locked and empty rooms. Also reported were the sounds of something being dragged along the floor and of a gun being fired. The next morning several of the group were to report that they had also heard the sound of a priest conducting a service.

During the period of investigation two nuns were seen by a frozen stream near the house. One nun was kneeling and appeared to be crying whilst the other appeared to be comforting her. The crying nun is thought to have been Isabella, sister of Robert Stuart, who had died in 1880.

Several of the group were active Spiritualists and they brought a Ouija board into the investigation. During the course of a seance a person giving the name of “Ishbel” came through and asked the investigators to go to the frozen stream where the two nuns had been seen. On reaching the spot the investigators saw the figure of a nun, quite clearly visible, wearing a black habit against a white snowy background, slowly walking up a glen until she suddenly vanished under a tree. The same nun was to be seen many times by the group before they finished their investigations.

Finally, in 1932 the house was totally uninhabitable and remained empty until 1963 when it was finally demolished.