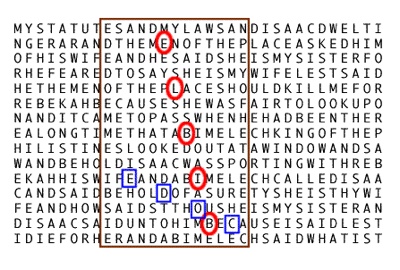 This theory claims that there are warnings encoded in the Judeo-Christian Bible, which concern future catastrophes, including the assassinations of Lincoln and JFK, 9/11, the end of the world, the identity of the Antichrist, the location from which the Antichrist will rise to prominence, etc.

The code is based on equidistant letters in the Hebrew translation of the Old and the Koine Greek translation of the New Testaments. The most impressive support for it is that the Bible Code was suggested by Sir Isaac Newton himself. He hypothesized the equidistant letters, and attempted to decipher some prophecies using the Hebrew Bible, but had to begin at random places throughout the book. But the letters have proven to be encoded so far apart that Newton could not decipher any meaningful messages.

Newton was not the first. No history of the code has been found prior to Bachya ben Asher, a 1200s Spanish rabbi, who came up with one 4-letter example, which stated the zero point of the Hebrew calendar.

Aside from that example, there are almost no known decryptions of biblical text before the mid-20th Century. Newton gave up, and the theory dwindled until the advent of the supercomputer. Computers can decipher the messages using brute force, and it is a fact that messages exist in random places, using random letter distances, throughout the Bible. Skeptics cannot deny this, but that have denied that the messages mean anything relevant to reality.

The sheer presence of even one of these coded messages seems to prove that the theory is sound, but no good conspiracy theory is ever proved or disproved so easily. There are documented decryptions of very detailed 9/11 prophecies, including phrases such as “twin towers,” “destroyed,” “airplanes,” “two,” “bin Laden,” “al-Qaeda,” “Pentagon,” even “Shanksville,” and the exact date, “11 September 2001.” Rumors that the times, to the minute, of the airplanes’ impact into the WTC are so far unsubstantiated.

But there are similarly detailed decryptions of Lincoln’s and JFK’s assassinations, including Booth and Oswald, respectively, the locations, “gunshot,” “from above,” and even “conspiracy.”

The primary criticism of the Bible Code’s authenticity is the fact that no future events have so far been decrypted, thus leading to an attempted prevention. The argument against this is that no one would have known to look for 9/11 prophecies without knowing it would occur.

But the most damning criticism is the argument that the Bible Code is an excellent example of “information theory,” which states that if a brute force search is performed on a finite grid of letters, sooner or later, it will turn up patterns that spell out information. This was tested on Moby Dick, chosen at random, which succeeded in prophesying the assassinations of both Yitzhak Rabin and Anwar al Sadat.

Believers of the conspiracy theory argue that brute force will turn up information, but that the probability that this information, in so small a space, would be patterned into any meaningful context is just too minute. The Moby Dick example has thus been criticized as not being as detailed as any of the Bible Code decryptions, and this is true.

If the Bible Code is ever proved to be true, believers declare, it will prove the existence of the Judeo-Christian God, as no committee of humans could perform such a literary feat.