In 1938, stories of a “killer ghost” began to be told in eastern Kentucky. Even though no one ever saw this malevolent apparition, it was said to have caused five very similar and unexplained deaths.

The story of the curse of Carl Pruitt’s grave goes back to an afternoon in 1938, in Pulaski County, Kentucky. Pruitt returned home after a day of work and expected to find his wife in the kitchen. Instead, he found her in a bedroom with another man. Enraged, Pruitt grabbed a chain and started to strangle her and her lover used the opportunity to flee the scene. After she was dead, Pruitt committed suicide.

Pruitt’s wife’s family refused to forgive Pruitt, so he was buried in a different cemetery in a different town. Visitors to the cemetery that came across Pruitt’s grave noticed something odd going on. There was some discoloration that looked like circles, and then they started to link together, making it look like there was a chain on the tombstone. The odd discoloration drew the attention of some people, including a young group of boys who rode their bikes over to the cemetery about a month after the chain had formed. To impress his friends, one boy threw a rock at the tombstone which chipped it. As the boy rode home, there was a freak accident and the chain came off his bike and wrapped around his neck, strangling him to death. 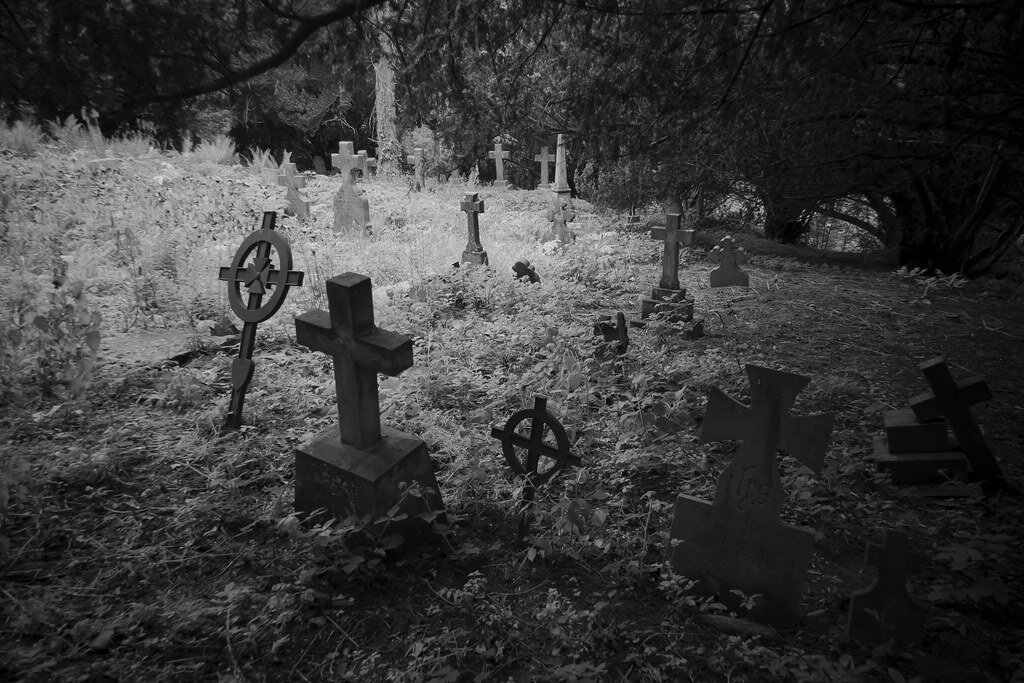 The boy’s mother was obviously devastated and decided to take it out on the tombstone. She took an ax and whacked at it a number of times. The next day, she was hanging up laundry when the clothesline somehow wrapped around her neck and strangled her. When her death was investigated, the ax was found with rock dust on it and it was dented, but Pruitt’s tombstone remained intact. A short time later, a farmer was riding in a horse drawn cart with his family past the cemetery. For some foolish reason, he decided to fire his pistol at Priutt’s tombstone. The gunfire spooked the horses, causing them to speed up. The farmer’s family jumped from the wagon, but the farmer stayed on until he was thrown from the carriage and a rein wrapped around his neck, strangling him.

Next, two policemen, who were convinced the curse was non-sense, went to the cemetery and took pictures of themselves in the area of Pruitt’s grave. As they drove away, a bright light started following them and they tried to speed away. This led to them driving off the road into a fence and the officer in the passenger seat was thrown from the car, but survived. His partner, on the other hand, had been nearly decapitated by a chain between the two fence posts.

By the time the 1940s rolled around, most people were staying away from the cemetery out of fear of losing their own life. But not everyone did. One man went into the cemetery and started to smash the tombstone with a hammer. People could hear the hammer bashing against the tombstone and then that was replaced by blood curdling screams. The townspeople investigated the cemetery and they found the man dead at the gates. Apparently he was frightened by something and ran away. As he got to the exit, the chain used to lock the gates somehow wrapped around his neck and strangled him to death. After that death, bodies were exhumed from the cemetery and a stripping company removed all the markers, including Pruitt’s wrathful tombstone.