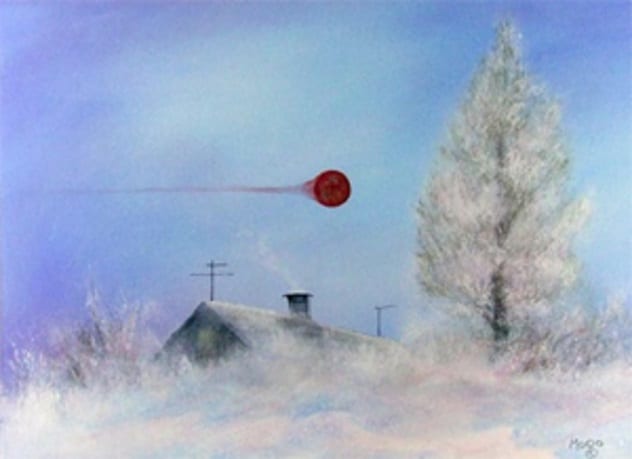 On the evening of January 29, 1986, a strange, red sphere suddenly appeared in front of hundreds of witnesses in the skies over the small mining town of Dalnegorsk, on the southeasternmost side of the Soviet Union. After moving steadily over the village for several moments, it suddenly began to fail and would ultimately crash into the Izvestkovaya Mountain—known to many as “Height 611” or “Hill 611.”[1]

Witnesses would report hearing an explosion and witnessing intense burning and flames around the apparent crash site. Before official investigators could examine the scene, several locals ventured up to the crash site the following day. Although they found obvious evidence of a disturbance, and likely intense heat judging from the burned-out tree stump and vegetation, they didn’t see or recover any actual wreckage. They did, however, discover strange “rock-like” pieces that had a metallic feel and look to them. They would hand these over to the chief investigator, Valeri Dvuzhilni of the Far Eastern Committee for Anomalous Phenomena.

When investigators examined the grounds more thoroughly, they would discover tiny metallic “droplets,” ranging in size from 2 to 5 millimeters. When these were later examined, they had a most complex inner structure of metallic fibers, along with gold thread and coverings of quartz crystal. Although tiny, these strange droplets, or the material that made them, was of obvious complex and intelligent design.

Furthermore, the burned-out tree stump was found to have melted on one side (presumably the side nearest to the heat of the crash site). The burning of the wood produced carbon, and it would have taken heat in excess of 3,000 degrees Celsius (5,432 °F) to melt such carbon. The case remains unexplained, although Dvuzhilni would theorize the possibility that the intense heat was not flames for the majority of the incident but repairs, which allowed the craft to take off before the locals arrived at the scene.