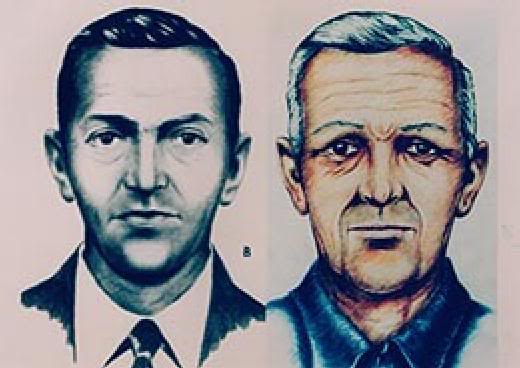 At least 95 percent of all investigations into the DB Cooper hijacking have made the same assumption. They all believe that he jumped out of the Boeing 727 at 8:13 pm which would have meant he was over a forest wilderness area north of Portland and west of Mount St. Helens. This assumption is based entirely on one factor – the pilot felt the tail of the plane lift suddenly a short while after Cooper lowered the rear stairs. That’s it!

Incredibly, this is the story that has stuck but did he really jump at 8:13 because if he didn’t then for over forty years people have been looking in the wrong place.

The official story states that the man calling himself Dan Cooper jumped from the rear stairs of the Boeing 727 aircraft at 8:13pm on the 24th November 1971. This ‘moment’ was determined because it was shortly after the time that the stairs were opened and because the pilot (Scott) noticed the tail of the aircraft lurch upwards and he claims he had to trim the wings to compensate. The motion felt by Scott was said to have been caused by the weight of Cooper leaving the stairs causing them to bounce upwards towards the fuselage. This assumption led to one of the largest manhunts on American soil and very much focused on the small town of Ariel some 25 miles north of Portland and turned up absolutely no trace of Cooper whatsoever.

But … what if Cooper didn’t jump at 18:13? Well, for a start it would explain why no trace of Cooper has ever been found in the region other than an old instruction placard and some money buried in a sandbank many miles away – both of which are quite easily explained.

What is the evidence that Cooper may have jumped later than most people accept? Here are some facts to consider:

The plane was flying through a blustery weather system with rain, crosswinds and updrafts. With the tail stairs lowered some aviation experts believe it is quite possible that the ‘upward motion of the tail’ was caused by air turbulence rather than by a man jumping out.

The stairs are often described as rebounding upwards after Cooper jumped but there are two problems with this part of the story. Firstly, Cooper knew enough about parachuting to know that jumping would be the wrong way to launch himself. It is far more likely that he would have eased himself off the stairs so that he would quickly be able to assume the freefall position and avoid tumbling. Secondly, the aft stair of the Boeing would have already been in the slipstream of the jet and if it was weak enough to rise after Cooper parachuted it would have been weak enough for the air pressure to have raised it up – which hadn’t happened.

The crew felt that the ‘upward motion’ meant that Cooper had jumped but, contrary to some versions of the story, they did not open or leave the cockpit until the aircraft touched down at Reno airport some 195 minutes later. Clearly the crew weren’t so certain that Cooper was gone after all.

Once on the ground the plane was surrounded by armed law enforcement officers and FBI agents who believed that Cooper could still be on-board and conducted a thorough search. It seems that, at the time, the authorities weren’t certain when Cooper jumped either.

A big unanswered question is … why would Cooper jump over the worst possible terrain in the worst possible weather? The FBI’s answer is simple. Cooper must have been an idiot. However, all the evidence suggests the opposite. Cooper clearly understood the aircraft, had carefully planned his mission, knew exactly what kind of parachutes he needed and even knew the details of the airstair mechanism – details not even known by the pilots. He had planned and correctly anticipated every move that his opponents would make and was quite adept at misdirection as can be seen in his instructions to ‘fly to Mexico’ while clearly he never planned to go there at all. With all this in mind it seems bizarre and unrealistic that he should jump over a heavily forested area that would make landing near impossible, in weather that could damage the parachute while knowing that he would then have to walk out of a dense cold wilderness in the dark while being hunted.

In fact, the authorities were initially convinced that Cooper was smart, familiar with airplanes and parachutes and knew what he was doing. It was only after it became clear that they were failing to catch him that they started portraying him as a fool who must have died while trying to escape. This is classic ‘sour grapes’.

Would Cooper have wanted the authorities to know when and therefore where he jumped? The answer is clearly ‘no’ or he wouldn’t have insisted that the crew were out of sight. In fact, all the crew were in the cockpit and the curtain dividing first class and the rest of the cabin had been closed on Cooper’s instructions. 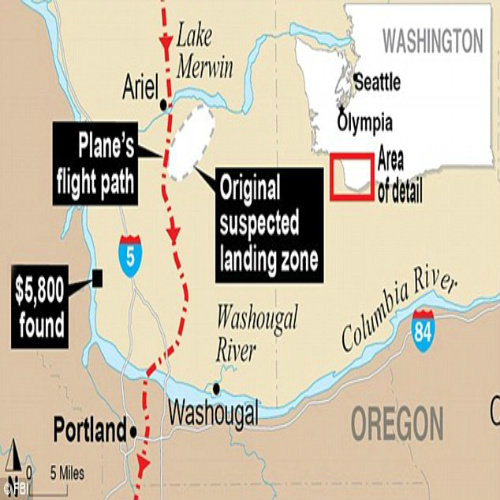 In the months that followed the skyjacking there was intense media interest and criticism of the failure to find any real trace of Dan Cooper. Questions were raised as to whether the investigators had got the time and place of the jump wrong. Six months after the event on the 1st June 1972 a team made up of representatives from the USAF, FBI and NWA flew out in the same aircraft over the Pacific and dropped two sleds made up to match Coopers body weight and the cash he would have been carrying. The results, observed by Flight Engineer Harold E. Anderson who had been on board Flight 305 at the time of the Skyjacking concluded that the pressure indicator results and tail motion experienced was the same. This seemed to clear up the question of where and when Dan Cooper left the aircraft.

As time has gone by a number of aviation specialists have raised some doubts over the test.

The weather conditions at the time of the test were very different to those originally experienced during the Skyjacking – particularly the absence of strong and unpredictable upward gusts of air.

The ocean surface was a significantly different terrain to that of the Cascade Mountain Range.

In the one statement the researchers said there was no discernible drag on the stairs yet in the same report they then said air pressure forced the stairs upwards when the +/- 200lb weight was removed.

The media and citizens of the USA were far more trusting with regard to official government statements and research. This is no longer the case and in fact the opposite can be said to be true.

The Pressure to be Correct

With regard to the USAF Sled Test it is worth noting that here was intense pressure on all parties involved in the investigation to confirm that their original assumptions about the drop-zone were correct.

The FBI: What is often overlooked is that Edgar J. Hoover – the founder of the FBI – was still director of this organisation at the time of the skyjacking. Hoover was already under severe pressure with regard to allegations that he was too powerful and was abusing his position of authority by being more focused on political manipulation than on crime. As a result Hoover was deeply troubled by the FBI’s failure to resolve the DB Cooper case. In addition, Hoover could have sanctioned the sled test at any time but this was not in fact carried out until 1st May 1972 precisely one month after his death from a heart attack on 2nd May 1972.

After Flight 305 took off from Sea-Tac Airport heading south it was followed by two F-106 fighter Delta Dart jets from the nearby McChord Air Force Base. These jets were piloted by airmen of the 318th Fighter Interceptor Squadron. Their instructions were to stay well back and not spook Cooper. In addition, the Delta Darts were wholly inappropriate for the job. As high speed interceptors they struggled to fly as slowly as the Boeing and were forced to use sweeping S-shaped flight patterns. Consequentially the pilots spent far more time trying to keep their jets in the air than watching out for Cooper and his parachute. To the embarrassment of the United States Air Force neither of the pilots tailing Flight 305 saw Cooper parachute out. This failure was initially explained by the bad weather over the Ariel region but later aviation specialists acknowledged that it would have been near impossible to see Cooper leave the Boeing 727 at any point on the flight path. At the time the United States Air Force had a vested interest in supporting the ‘bad weather’ jump zone as was a plausible reason for their failure and drew attention away from the fact that the F-106 Delta Darts had been the wrong aircraft for the job.

By 1972 NWA were well and truly tired of the DB Cooper incident and speculation. The ongoing media coverage was perceived by many within the management team as a never ending source of negative publicity. In general, they wanted the case kept as simple as possible.

During the 1972 Sled test a number of agents and representatives were present. Key to the study was Flight Engineer Harold E. Anderson who had been on board Flight 305 during the hijacking. Anderson confirmed that the movement and pressure readings matched what they had experienced over the Cascades. However, neither pilots Scott or Rataczak took part in the test making the assessment largely a subjective one. It has been argued that Anderson may have been put under pressure to confirm the success of the test to avoid the considerable repercussions that would have occurred if the tests had been negative.

Had the Sled Test proved negative there is no doubt that many people and organisations would have been publically embarrassed and a fair number of senior people would have probably lost their jobs. At the time, right at the height of the Cold War with Russia, this admission of failure could not be imagined or permitted.

Unfortunately, as with so much about the DB Cooper mystery, we will never know for sure. What we do know is that the evidence that DB Cooper jumped out of Flight 305 at 8:15 is circumstantial and further ‘tests’ to confirm this conclusion may even have been deliberately misleading. The fact is that countless government and private searches carried out over a 45 year period have failed to turn up a body, parachute, webbing, clothing or the bulk of the ransom cash itself. Surely this must raise the question – has everybody been looking in the wrong place?