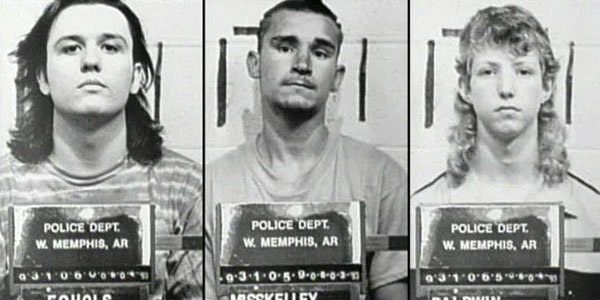 The West Memphis Three are three young men who were convicted in 1994 of the murders of three little boys in 1993 in West Memphis, Arkansas. The victims, Steve Branch, Christopher Byers and James Moore were discovered in a ditch, hogtied and naked. Portrayed as a satanic ritual by the prosecution, Jessie Misskelley, Jason Baldwin and Damien Echols were found guilty of the murders. Sentenced to death, they were released in 2011 after entering an Alford plea, which allows them to maintain innocence but under a guilty plea. Their prison sentence was commuted to time served.

Even though they maintained their innocence later, Misskelley confessed to the murders before trial. Echols claimed that he gained powers from drinking blood, and had a significant interest in witchcraft. All three defendants had prior interactions with authorities. Now free, the search continues for the real killers of the boys.

In 2013, the parents of the victims were called together to review evidence with the police. A new list of suspects was compiled, including the stepfather of Steve Branch. Authorities have discovered new DNA that could link a killer to the victims but have yet to make any arrests. In the meantime, the families of the victims are left to wonder what really happened.