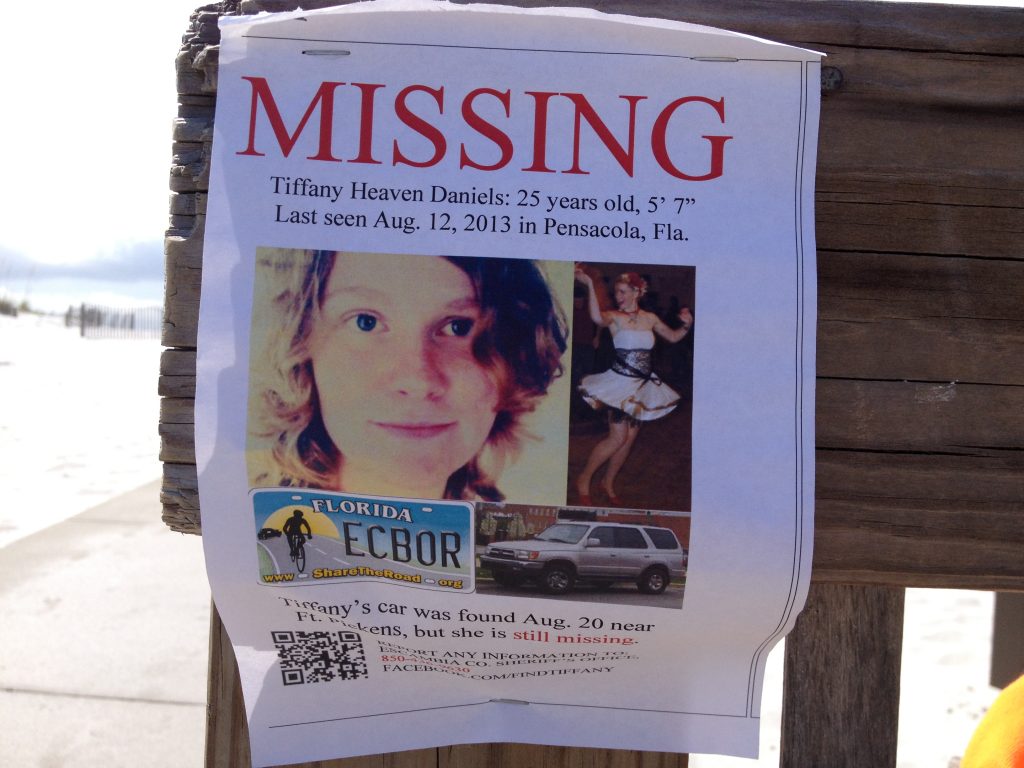 On August 12, 2013, Tiffany Daniels left home early that morning, heading off to Pensacola State College where she worked as a technician in the school’s theater department. She completed her shift painting sets, and left work early at 4:43 pm in the afternoon.

Her supervisor later said that Daniels asked to leave work early that day without giving further details explaining why. She also requested to take some extra time off, possibly for the rest of the week “to take care of some things”, which he agreed.

Tiffany Daniels was last captured by surveillance camera getting in her gray Toyota car and leaving the school’s parking lot.

In the evening her roommate grew concerned when Daniels did not return home by 10:00 pm. By the end of the week, after noticing she failed to return home and had been absent at work, Daniels’s family was contacted.

Her mother filed a missing person report to the Escambia County Sheriff’s Office who later referred the case to the Pensacola Police Department, as Daniels was last seen and working in the city of Pensacola.

Due to her computer’s internet history, investigators discovered that Daniels may have returned to her house briefly, after her early departure from work. But her roommate Nichols, who was present at the time, did not recall Daniels’s presence as he was talking on the phone.

On August 20, a vehicle was found abandoned near Fort Pickens, nine days after Daniels went missing. The undamaged gray Toyota 4Runner belonging to Daniels, with the Florida license plate number ECBOR, was parked in a parking lot of Park West at Pensacola Beach.

Upon searching the car, investigators found Daniels’s bicycle, cell phone, purse with her wallet, paintings, some clothes, peanut butter and a jug of water. Investigators also discovered two unidentified fingerprints in the car that did not match Daniels or any of her family or friends. One print was found on the door handle, and the other on the steering wheel.

A neighbor living across the street claimed the car was only parked at the parking lot two days before its discovery. Authorities conducted an extensive search of the area, but found no clues as to Tiffany’s whereabouts.

According to two vacationers in the area, a white male wearing red shorts, described as being in his thirties, was reported getting in or around Daniel’s vehicle.

Security camera on the Bob Sikes Bridge connecting Gulf Breeze and Santa Rosa islands captured Daniels’s car crossing the bridge at 7:51 pm, three hours after she had left work on August 12. But the driver couldn’t be identified as Daniels since the footage wasn’t clear enough.

In January 2014, a waitress claimed to have witnessed a woman matching Tiffany’s description in a restaurant in Metairie, Louisiana. She was said to be with two other women, one of them the same age as Daniels, and one possibly latina, who was reportedly doing most of the talking in the group. 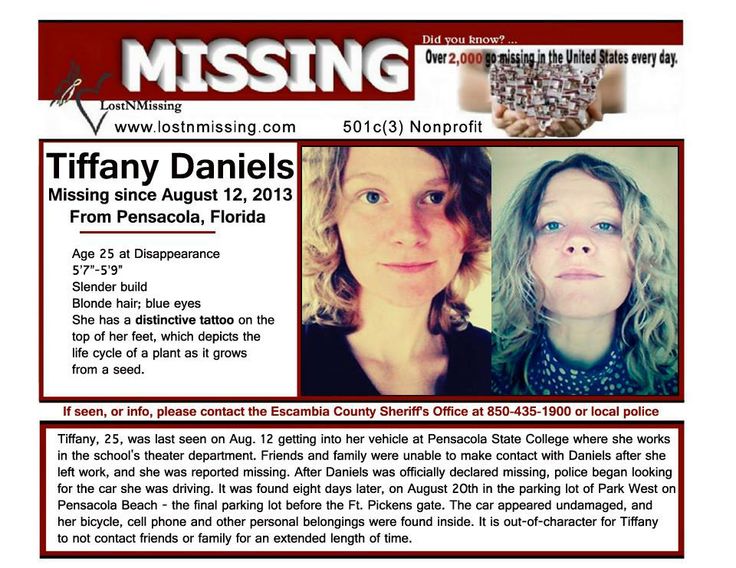 Daniels’ parents believed the woman to be their daughter, as she frequently put her sleeves over her hands when she was cold, as described by the waitress. Furthermore, the woman asked whether the broth for one of the meals was chicken or fish. Daniels became a pescetarian four years before she disappeared.

Authorities couldn’t confirm the waitresses testimony since the restaurant security cameras had been taped over since the encounter.

The possibility of Daniels being a victim of a human trafficking scheme hasn’t been excluded at this point, but authorities found no evidence to support the theory.

Police found no evidence, means or motive for foul play in Tiffany Daniels’s disappearance. But family members believe that Daniels may have been coerced by an unknown person(s), or may have been a victim of a human trafficking scheme.

The circumstances of Tiffany Daniels disappearance remain unclear and her case is currently classified as missing. Her case remains unsolved.

Tiffany is a caucasian female with blonde hair and blue eyes. She is 5’7 tall and weighs 135 pounds with a slender build.

Daniels has distinctive tattoos on the top of her feet, depicting the life cycle of a plant as it grows from a seed.