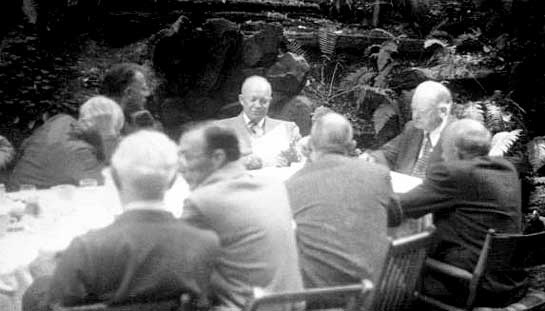 In December 1984 a package with no return address and an Albuquerque post-mark arrived in Jaime Shandera’s mail in North Hollywood, California. Inside was a roll of 35mm film. When developed, it turned out to contain eight pages of an alleged briefing paper, dated November 18, 1952, in which Vice Adm. Roscoe Hillenkoetter told President-elect Dwight Eisenhower of the recovery of the remains of two crashed spaceships.

In the first of these crashes, in e­arly July 1947, authorities recovered the bodies of four humanoid beings. According to the document, which appended a copy of what was supposed to be the actual executive order, President Harry Truman authorized the creation of a supersecret group called “Majestic 12” (MJ-12 for short) to study the remains.

Acting on a tip from sources who claimed to represent Air Force intelligence, Shandera and his associate William Moore (coauthor of The Roswell Incident) flew to Washington, D.C. They searched the National Archives looking for references in official documents to MJ-12. They found a July 1954 memo from Gen. Robert Cutler, an Eisenhower assistant, referring to an “MJ-12 SSP [Special Studies Project]” to be held at the White House on the 16th of t­hat month.­

When this document was released in May 1987, it sparked massive controversy. The document is believed to be a hoax, but the identity and motive of the perpetrator remain unknown.

In the spring of 1987 an unknown individual, allegedly associated with an intelligence agency, gave British writer Timothy Good a copy of the MJ-12 document. Upon learning Good was going to disclose its existence to the press, Moore and Shandera released their copy, along with the Cutler memo. The result was a massive uproar, including coverage in The New York Times and Night line, an FBI investigation, and furious controversy that continues to this day.

For various technical reasons most investigators agree tha­t the MJ-12 document is a forgery, but the identity of the forger remains a deep mystery that even the FBI cannot crack. The forger apparently had access to obscure official information, much of it not even in the public record, leading to suspic­ions that an intelligence agency created the document for disinformation purposes. Whatever the answer, the MJ-12 document is surely the most puzzling hoax in UFO history.

NOTE: This document has been prepared as a preliminary briefing only. It should be regarded as introductory to a full operations briefing intended to follow.

* * * * * *
OPERATION MAJESTIC-12 is a TOP SECRET Research and Development/Intelligence operation responsible directly and only to the President of the United States. Operations of the project are carried out under the control of the Majestic-12 (Majic-12) Group which was established by special classified executive order of President Truman on 24 September, 1947, upon recommendation by Dr. Vannevar Bush and Secretary James Forrestal. (See Attachment “A”.)

On 24 June, 1947, a civilian pilot flying over the Cascade Mountains in the State of Washington observed nine flying disc-shaped aircraft traveling in formation at a high rate of speed. Although this was not the first known sighting of such objects, it was the first to gain widespread attention in the public media. Hundreds of reports of sightings of similar objects followed. Many of these came from highly credible military and civilian sources. These reports resulted in independent efforts by several different elements of the military to ascertain the nature and purpose of these objects in the interests of national defense. A number of witnesses were interviewed and there were several unsuccessful attempts to utilize aircraft in efforts to pursue reported discs in flight. Public reaction bordered on near hysteria at times.

In spite of these efforts, little of substance was learned about the objects until a local rancher reported that one had crashed in a remote region of New Mexico located approximately seventy-five miles northwest of Roswell Army Air Base (now Walker Field).

On 07 July, 1947, a secret operation was begun to assure recovery of the wreckage of this object for scientific study. During the course of this operation, aerial reconnaissance discovered that four small human-like beings had apparently ejected from the craft at some point before it exploded. These had fallen to earth about two miles east of the wreckage site. All four were dead and badly decomposed due to action by predators and exposure to the elements during the approximately one week time period which had elapsed before their discovery. A special scientific team took charge of removing these bodies for study. (See attachment “C”.) The wreckage of the craft was also removed to several different locations. (See Attachment “B”.) Civilian and military witnesses in the area were debriefed, and news reporters were given the effective cover story that the object had been a misguided weather research balloon.

A covert analytical effort organized by Gen. Twining and Dr. Bush acting on the direct orders of the President, resulted in a preliminary consensus (19 September, 1947) that the disc was most likely a short range reconnaissance craft. This conclusion was based for the most part on the craft’s size and the apparent lack of any identifiable provisioning. (See Attachment “D”.) A similar analysis of the four dead occupants was arranged by Dr. Bronk. It was the tentative conclusions of this group (30 November, 1947) that although these creatures are human-like in appearance, the biological and evolutionary processes responsible for their development has apparently been quite different from those observed or postulated in homo-sapiens. Dr. Bronk’s team has suggested the term “Extra-terrestrial Biological Entities”, or “EBE’s”, be adopted as the standard term of reference for these creatures until such time as a more definitive designation can be agreed upon.

Since it is virtually certain that these craft do not originate in any country on earth, considerable speculation has centered around what their point of origin might be and how they get here. Mars was and remains a possibility, although some scientists, most notably Dr. Menzel, consider it more likely that we are dealing with beings from another solar system entirely.

Numerous examples of what appear to be a form of writing were found in the wreckage. Efforts to decipher these have remained largely unsuccessful. (See Attachment “E”.) Equally unsuccessful have been efforts to determine the method of propulsion or the nature or method of transmission of the power source involved. Research along these lines has been complicated by the complete absence of identifiable wings, propellers, jets, or other conventional methods of propulsion and guidance, as well as a total lack of metallic wiring, vacuum tubes, or similar recognizable electronic components. (See Attachment “F”.) It is assumed that the propulsion unit was completely destroyed by the explosion which caused the crash.

A need for as much additional information as possible about these craft, their performance characteristics and their purpose led to the undertaking known as U. S. Air Force Project SIGN in December, 1947. In order to preserve security, liaison between SIGN and Majestic-12 was limited to two individuals within the Intelligence Division of Air Material Command whose role was to pass along certain types of information through channels. SIGN evolved into Project GRUDGE in December, 1948. The operation is currently being conducted under the code name BLUE BOOK, with liaison maintained through the Air Force officer who is head of the project.

On 06 December, 1950, a second object, probably of similar origin, impacted the earth at high speed in the El Indio – Guerrero area of the Texas – Mexican border after following a long trajectory through the atmosphere. By the time a search team arrived, what remained of the object had been almost totally incinerated. Such material as could be recovered was transported to the A.E.C. facility at Sandia, New Mexico, for study.

Implications for the National Security are of continuing importance in that the motives and ultimate intentions of these visitors remain completely unknown. In addition, a significant upsurge in the surveillance activity of these craft beginning in May and continuing through the autumn of this year has caused considerable concern that new developments may be imminent. It is for these reasons, as well as the obvious international and technological considerations and the ultimate need to avoid a public panic at all costs, that the Majestic-12 Group remains of the unanimous opinion that imposition of the strictest security precautions should continue without interruption into the new administration. At the same time, contingency plan MJ-1949-04P/78 (Top Secret – Eyes Only) should be held in continued readiness should the need to make a public announcement present itself. (See Attachment “G”.)