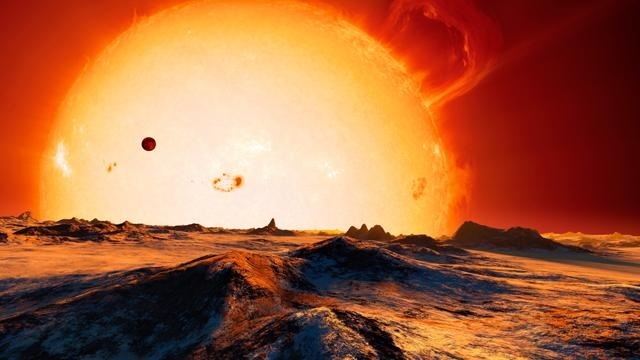 What does the distant future hold for earth?

The biological and geological future of the Earth can be extrapolated based upon the estimated effects of several long-term influences. These include the chemistry at the Earth’s surface, the rate of cooling of the planet’s interior, the gravitational interactions with other objects in the Solar System, and a steady increase in the Sun’s luminosity. An uncertain factor in this extrapolation is the ongoing influence of technology introduced by humans, such as geoengineering, which could cause significant changes to the planet. The current biotic crisis is being caused by technology and the effects may last for up to five million years. In turn, technology may result in the extinction of humanity, leaving the planet to gradually return to a slow evolution pace only resulting from long-term natural processes.

Over time intervals of hundreds of millions of years, random celestial events pose a global risk to the biosphere, which can result in mass extinctions. These include impacts by comets or asteroids with diameters of 5–10 km (3.1–6.2 mi) or more, and the possibility of a massive stellar explosion, called a supernova, within a 100-light-year radius, called a Near-Earth supernova. Other large-scale geological events are more predictable. If the long-term effects of global warming are disregarded, Milankovitch theory predicts that the planet will continue to undergo glacial periods at least until the quaternary glaciation comes to an end. These periods are caused by eccentricity, axial tilt, and precession of the Earth’s orbit. As part of the ongoing supercontinent cycle, plate tectonics will probably result in a supercontinent in 250–350 million years. Some time in the next 1.5–4.5 billion years, the axial tilt of the Earth may begin to undergo chaotic variations, with changes in the axial tilt of up to 90°.

During the next four billion years, the luminosity of the Sun will steadily increase, resulting in a rise in the solar radiation reaching the Earth. This will cause a higher rate of weathering of silicate minerals, which will cause a decrease in the level of carbon dioxide in the atmosphere. In about 600 million years, the level of CO2 will fall below the level needed to sustain C3 carbon fixation photosynthesis used by trees. Some plants use the C4 carbon fixation method, allowing them to persist at CO2 concentrations as low as 10 parts per million. However, the long-term trend is for plant life to die off altogether. The resulting loss of oxygen replenishment will cause the extinction of animal life a few million years later.

In about 1.1 billion years, the solar luminosity will be 10% higher than at present. This will cause the atmosphere to become a “moist greenhouse”, resulting in a runaway evaporation of the oceans. As a likely consequence, plate tectonics will come to an end. Following this event, the planet’s magnetic dynamo may come to an end, causing the magnetosphere to decay and leading to an accelerated loss of volatiles from the outer atmosphere. Four billion years from now, the increase in the Earth’s surface temperature will cause a runaway greenhouse effect. By that point, most if not all the life on the surface will be extinct. The most probable fate of the planet is absorption by the Sun in about 7.5 billion years, after the star has entered the red giant phase and expanded to cross the planet’s current orbit.