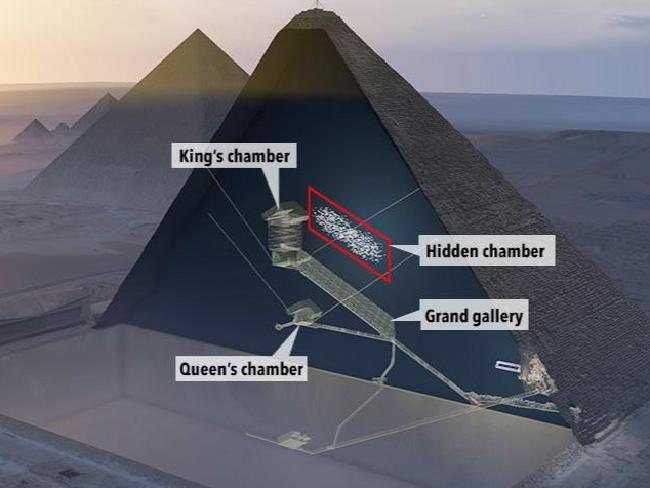 We may have uncovered the answers of a few mysteries this year, but if we’ve learned anything, it’s that we still know very little, about a lot. Despite our technological ability in this modern world there are many mysteries that continue to haunt us….

An international team of scientists made the first baffling new discovery inside Egypt’s Great Pyramid of Giza for the first time since the 1980s.

A hidden chamber was discovered above the pyramid’s Grand Gallery but the purpose for the room is unclear — scientists are yet to get access inside.

Mehdi Tayoubi, a co-founder of the ScanPyramids project and president of the Heritage Innovation Preservation Institute said the team plans to work with others to come up with hypotheses about the area.

“The good news is that the void is there, and it’s very big,” he said.

MYSTERY BOOMS HEARD ACROSS THE PLANET

The unexplained mysterious booming sounds were heard everywhere from Alabama and Australia this year but curiously, no one is really able to explain how or why these strange noises have appeared across the Earth.

On October 10, a similar sound left Cairns locals confused. Many suggested it was an FA-18 Hornet plane was heard flying but a meteor research centre nearby captured an image of a fireball lighting up the sky at the same time.
Two weeks later, another boom was heard over the Eyre Peninsula in South Australia at the same time a blue meteor passed across the sky.

Some experts say causes could range from supersonic aircraft to meteors exploding in the atmosphere but after reported 64 locations reporting the strange sound, NASA’s Bill Cooke admitted the origins remain unclear.
If you listen to conspiracy theorists, an unnamed geologist who “works for the government” told Earthfiles that “something is going on in the inner core of the Earth”.

IS THIS THE SITE OF AMELIA EARHART’S CRASH?

The curious case of Amelia Earhart’s disappearance during her attempt to fly around the world 80 years ago has long remained legend as researchers hunt for her remains to this day.

This year, we may have gotten closer than ever before, in fact National Geographic said the mystery “of what happened to Amelia Earhart may be as close as it’s ever been to being solved”.

The publication used four bone-sniffing dogs who each detected human remains in the same spot on a remote island in the Pacific, Nikumaroro, Kiribati, which many believe is where Earhart and navigator Fred Noonan crashed on July 2, 1937, en route to Howland Islan, an uninhabited island north of the equator in the Pacific Ocean..

“The signals were clear: Someone — perhaps Earhart or her navigator, Fred Noonan — had died beneath the ren tree,” according to the publication.

Still, Fred Hiebert, National Geographic’s archaeologist-in-residence, said the odds of actually extracting DNA from a tropical environment such as Nikumaroro’s are slim.

Archaeologists have been left baffled by a mysterious ancient city filled with gigantic square blocks that lie over the Pacific.

Nan Madol is located just off the remote island of Pohnpei in Micronesia and experts are puzzled by the island, which consists of 97 individual blocks separated by narrow channels of water. They claim the blocks are “remarkably similar”, but the reason for these gigantic structures remains unclear.

While the site was home to an ancient race, little is known about them or why they chose to build these hardy structures.

More than 400 previously undocumented structures which cover the land in their thousands — or “gates” as they are called — have been uncovered by an Australian archaeologist.

According to Dr David Kennedy, the structures are anything but random; in fact, they are quite deliberate. To this day much of the conclusions are still speculation at best, but they are thought to date back as far as 9000 years ago and used by nomadic tribes as traps for hunting and farming.

The challenge for experts now is to study them on the ground. It could be decades until we find the real answer — until then, the Arabian secrets remain buried in the sand.