The Hoia Baciu Forest a.k.a World’s Most Haunted Forest, is situated near Cluj-Napoca, Romania covers an area of over 250 hectares and is often referred to as the Bermuda Triangle of the country.

Hoia Baciu Forest, has a reputation for intense paranormal activity and unexplained events. Reports have included, ghost sightings, unexplained apparitions, faces appearing in photographs that were not visible with the naked eye, and in the 1970’s, UFO sightings were reported and captured on film. 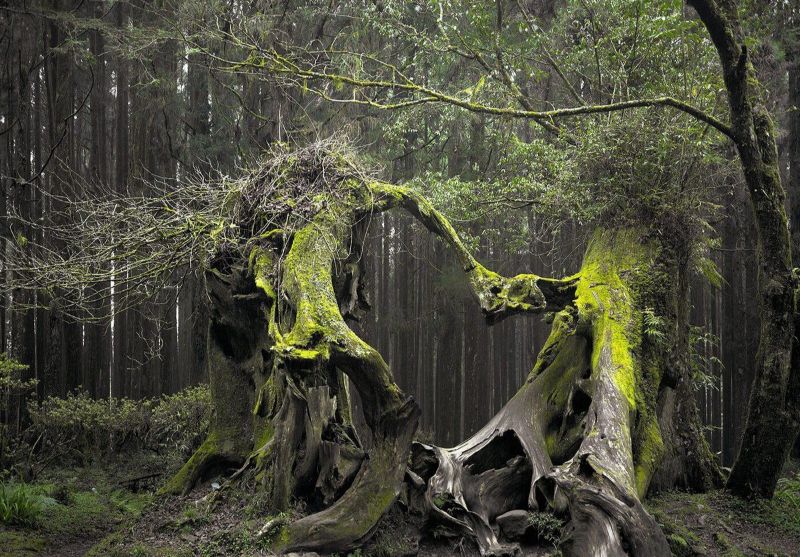 Visitors to the forest often report intense feelings of anxiety and the feeling of being constantly watched. Moreover, the local vegetation is somehow bizarre in appearance, like something out of a make-believe story with strangely shaped trees, and unexplained charring on tree stumps and branches.

The forest was named after a shepherd that disappeared in the area with a flock of two hundred sheep. Most people who live near the forest are afraid to enter it due to the stories and legends that have been handed down. They believe that those who visit the site will never return back home. Many of the locals who have been brave enough to venture into the forest complained of physical harm, including rashes, nausea, vomiting, migraines, burns, scratches, anxiety, and other unusual sensations.

This dense forest first gained notoriety in the late 1960’s when a biologist named Alexandru Sift snapped several amazing photos of a flying disc-shaped object in the sky above the forest. On August 18, 1968, a military technician named Emil Barnea captured a famous photography of a saucer flying over the Hoia Baciu Forest . The, in the 1970’s, the area was a hotbed for UFO sighting and unexplained lights.

People who have entered the forest to this day get inexplicable rashes or they begin to feel very light-headed and ill. Moreover, the electronic devices are known to malfunction when introduced into the area. Some paranormal investigators have associated these strange malfunctions with supernatural activity.

The Hoia Baciu Forest has a reputation for paranormal and unexplained activity and people have witnessed numerous strange events on the land. The most common phenomenon includes the sudden appearance of mysterious orbs of light. People also report hearing disembodied female voices breaking the heavy silence, giggling and even apparitions, There are many cases of people reportedly being scratched. All these things happen with no reasonable explanation. Some people believe that the forest is a gateway to another dimension. Within the dark interior of Hoia Baciu Forest , people have been known to disappear, strange lights have been seen, the wind seems to speak,. Several stories tell of people entering the forest and experiencing missing time. Some have known to be missing for quite some time with no recollection of how they had spent that time.One such story focuses on a 5-year-old girl who wandered into the woods and got lost. The story goes that she emerged from the forest 5 years later, wearing the same untarnished clothes that she wore on the day she disappeared with no memory of where had happened in that interval of time.

Another story of the The Hoia Baciu Forest has been telling about the strange paranormal phenomena which have been recorded and researched for nearly 50 years. The woods are thought to be notoriously haunted by the Romanian peasants who were murdered here. It is believed that the souls of these tormented ghosts are trapped within the wooded confines of Hoia Baciu Forest and that these entities are enraged by their predicament. Visions of these tormented spirits are sometimes observed by terrified travelers. Pairs of haunting, observing green eyes and a heavy black fog have been observed here. Many people report a feeling of being watched as they travel near the forest’s edge.

This paranormal activity seems to be focused on an inexplicable clearing in the forest that is a vegetation dead zone. It is nearly a perfect circle in the woods where nothing ever grows. Soil samples have been taken from the site and analyzed but the results show that there is nothing in the soil that should prevent the growth of plant life. Locals believe that it is a hub for this paranormal activity. They consider this circular plateau deep in the forest to be the “home” of these ghosts. UFO’S, a dead vegetation zone, lights with no logical source, poltergeist activity, EVP activity, and malfunctioning electronics are the documented paranormal happenings of this creepy forest. While some of the stories about this legendary location may be exaggerated, it is hard to ignore the fact that something is going on in this forest that we may not completely understand.

The mysterious Hoia Baciu Forest is beginning to compete more and more with the Dracula legend in Transylvania…It has become more famous because of unexplained phenomena, which are considered by some as manifestations of the paranormal. This forest’s fame is spreading worldwide.

Prestigious publications such as Travel & Leisure magazine or BBC have included this among the most interesting forest haunted areas on the planet. And its fame continues to attract tourists from all walks of life. Two years ago, the famous actor, Nicolas Cage, was shooting a film in Sibiu. Cage came to Cluj specifically to see this mysterious forest.

There are people who believe that within Hoia Baciu Forest there is a portal that provides access to other universes. There are also countless legends and stories about contact with entities outside our known world occurring here every year.