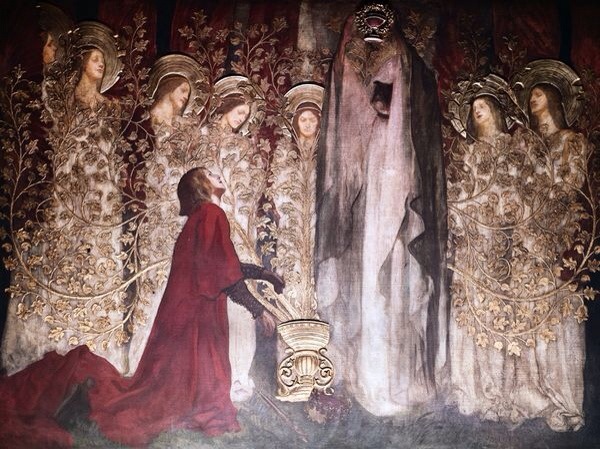 This 1895 painting by Edwin Austin Abbey shows the Arthurian knight Sir Galahad discovering the fabled Holy Grail. The famous chalice earned its spiritual power as the cup used by Jesus Christ during the Last Supper.

In the Bible, the cup used by Jesus Christ at the Last Supper is little more than a prop, given no particular prominence. But over the centuries, the fate of this now legendary vessel, the so-called Holy Grail, has come to haunt stories ranging from Arthurian legend to Indiana Jones and the Last Crusade.

Because Jesus used the cup during the Last Supper in what became the basis for the Christian Eucharist, the Grail has for many taken on the aura of an extremely holy relic.

The Grail takes on even greater significance from tales that Joseph of Arimathea, in whose tomb Jesus was placed prior to his resurrection, used the cup to collect Jesus’ blood while he was being crucified.

Theories abound as to where the cup eventually went. One says the Knights Templar, a medieval military order that persisted for more than 200 years, took it from Jerusalem during the Crusades.

There’s also a story in which Joseph carries the Grail to Glastonbury, England, a Roman outpost at the time of Christ’s crucifixion. In 1906, in fact, a blue bowl claimed by some to be the Grail was found there, and since then at least four other cups have been proclaimed to be the Grail, two from England and Wales and two from the Middle East.

But the reality, says historian Richard Barber, author of The Holy Grail: Imagination and Belief, is that the Grail stories are just that—stories.