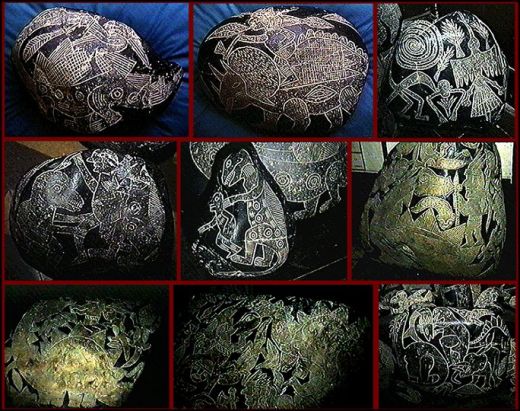 The Ica stones are a collection of andesite stones that contain what are alleged to be ancient depictions of dinosaurs and advanced technology. Beginning in the 1930s, the father of Dr. Javier Cabrera, Cultural Anthropologist for Ica, Peru, discovered many hundreds of ceremonial burial stones in the tombs of the ancient Incas. Dr. Cabrera collected more than 1,100 of these andesite stones, which are estimated to be between 500 and 1,500 years old and have become known collectively as the Ica Stones. The stones bear etchings, many of which are sexually graphic (which was common to the culture), some picture idols and others depict such practices as open-heart surgery and brain transplants. The most astonishing etchings, however, clearly represent dinosaurs – brontosaurs, triceratops (see photo), stegosaurus and pterosaurs. While skeptics consider the Ica Stones a hoax. The stones are reported to have been found in caves and stream beds. Because they are rocks and contain no organic material, Carbon-14 dating cannot be used. No other method of radiometric dating has been applied to the stones. Furthermore, even a confirmation of the rocks’ age would not prove that the engravings upon them had not been produced at a later date.

The stones depict a wide variety of scenes: dinosaurs attacking or helping humans, advanced technology, advanced medical operations, maps, and sexual depictions. While there is a degree of ambiguity that leaves room for differing interpretations, they display definite knowledge of things that are wholly anachronistic. They have caught the 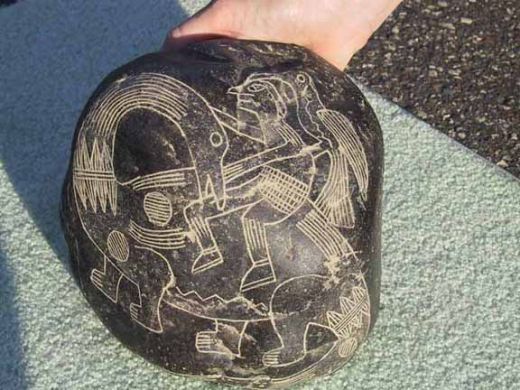 attention of many people inclined to question aspects of modern science, and Creationists and others have used the Ica stones to argue against prevailing scientific theories.

Cabrera attempted to resolve the many scenes into a narrative, and from there to decipher a history of the civilization he believed made the stones. He believed that the ancient technology belonged to what he called Gliptolithic Man, an extraterrestrial race which supposedly arrived sufficiently long ago to coexist with the dinosaurs and then genetically engineered modern man. Cabrera believes that some time afterward, they left to another planet, utilizing the nearby Nazca lines as a spaceport, before some unspecified catastrophe occurred.

In 1998, Spanish investigator Vicente Paris declared after four years of investigation that the evidence indicates that the stones are a hoax. Among the proofs presented by this investigator were microphotographs of the stones that showed traces of modern paints and abrasives. The strongest evidence of fraud as claimed is the crispness of the shallow engravings; stones of great age should have substantial erosion of the surfaces.