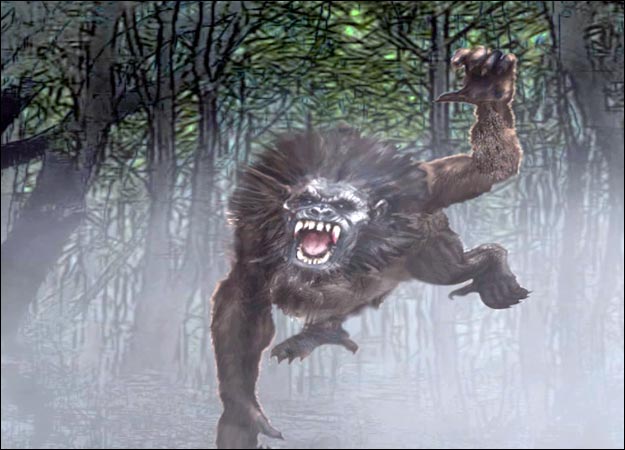 The Devil Monkey is a cryptozoological giant monkey reported on June 26, 1997 in Dunkinsville, Ohio. It was reportedly around 5 ft tall and had long, pointed ears. It appeared to be grey, had large, dark eyes, long arms, a short tail, and had hair all over its body about 1.5 in long, and is reportedly very aggressive.

The legend of the Devil Monkey

In the tiny town of Danville, New Hampshire, a frightening creature known as the “devil monkey” was known for howling loudly during the night. A large primate with long claws, a reddish-brown coat, and a doglike snout with razor-sharp teeth, the creature occasionally entered the town.

In September 2001, Danville’s fire chief claimed that he saw an unknown creature running through Danville’s streets late one night. After this sighting, the devil monkey was seen nine other times over a two-week period, causing a small panic throughout Rockingham County. After search parties failed to locate the beast by late September, eyewitness reports dried up and the devil monkey no longer haunted the residents of Danville. Most believe that a feral but non-demonic monkey was behind the devil monkey hysteria, although more superstitious voices claim that the creature moved to the secluded northern mountains of New Hampshire.

In the summer of 2015, Rockingham County was gripped in fear as reports of a “hairy beast” seen dragging what looked like either a young child’s body or a doll circulated in the area.

The similarity of the hairy beast to the earlier sightings in 2001 was noted and the press soon reported the incident as “the return of the Monkey Devil. However, following the sightings no missing child”

No further sightings have been reported