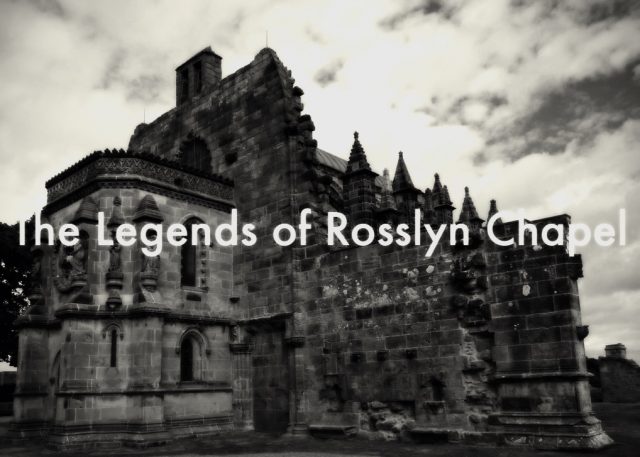 Rosslyn Chapel near Edinburgh, has long been one of Britain’s most quietly mysterious places. The Da Vinci Code novel and film have recently brought it an unaccustomed celebrity. But why does a small chapel continue to intrigue the world hundreds of years after it was first constructed, and what is the real history behind the fiction?

The Legends of Rosslyn

Rosslyn Chapel is a place wreathed in legend and most of the legends are associated with the Knights Templar. The Templars were a crusading order, a band of warrior monks who were pledged to protect Christian pilgrims travelling to the Middle East. Their cause was a popular one. Wealthy people often left money or land to the Templars in their wills and, over time, the order became immensely rich; so rich in fact that even kings began to resent and fear the Templars. The French king, Philip IV, who had de facto control of the Papacy, in 1312, persuaded his puppet on the papal throne to issue an edict accusing the Templars of practising black magic, dissolving the order and confiscating its wealth.

According to legend, the Templars then fled to Scotland and took up residence there. Why Scotland? Well, Scotland’s King Robert the Bruce had once murdered one of his rivals in a church and, as a consequence, had been excommunicated. Scotland was therefore one of the few places in Europe where the writ of the Papacy did not run. The founder of the Templar order, Hugo de Payns, had also been married to Catherine de St Clair of Roslin so the order had historical connections to Scotland. According to the legend, the Templars then put down roots in their new country.

Having accumulated a vast store of occult knowledge in the East where they had been exposed to a variety of mystical traditions, they chose to embody it in the carvings of Rosslyn Chapel when construction began on it in 1446, perhaps even burying their fabled treasure within its vaults – which some say included the Holy Grail itself. Rumours of mysterious artefacts, either contained within secret vaults beneath the chapel, or embedded within the Apprentice Pillar, one of the most ornate pillars in the building, have circulated for a long time. These hidden treasures have been said to include the Holy Grail, the mummified head of Jesus, and documents from the early period of the Christian faith.

A descendant of the St. Clair family was the first Grand Master of the Order of Freemasons in Scotland. This has given rise to the belief that Freemasonry had its roots in Templar tradition. 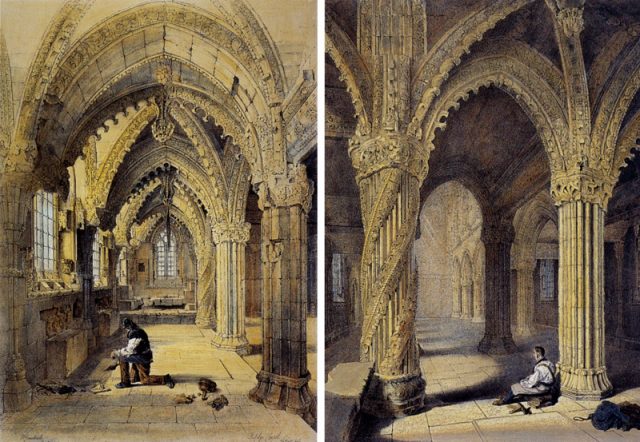 A Mystery Of music

On April 30, 2007, Scotland’s newspaper of record, The Scotsman, published a short article headlined “Musical Secret Uncovered in Chapel Carvings,” about a father-and-son team of Edinburgh musicians, Tommy and Stuart Mitchell, who claimed to have “found a secret piece of music hidden in carvings at Rosslyn Chapel.” It was, Stuart said, like finding a “compact disc from the 15th century.”

The Truth Behind the Legend

How much truth is there in the legend? Some historians dispute the claims of a connection between the Templars and Rosslyn Chapel. They contend that Sir William St Clair, far from being a member of the Templars, was in fact opposed to them, having given evidence against them at a trial.

The buried treasure question remains unanswered. Some have called for the vaults to be opened so it can be settled once and for all. According to tradition, male members of the St Clair family were buried there without coffins, in their full knightly regalia. A few voices have even been heard, calling for the Apprentice Pillar to be cracked open to see whether there is anything inside.

The Rosslyn Chapel Trust will have none of this, however. Nor is Historic Scotland, the government agency whose responsibilities include safeguarding historic buildings, likely to look favourably on such proposals. There would even be legal barriers to such a course of action. Since Rosslyn chapel is a burial site, the legal Right of Sepulchre would apply, and a series of complex legal procedures would have to be gone through before excavation could take place. A non-invasive seismic survey, undertaken in the 1980s, did reveal metal objects contained within the vaults, but proposals for further scans met a chorus of opposition in 2003 and no further investigation seems likely to take place in the near future.

Whatever the truth of some of the more extravagant claims made about Rosslyn Chapel, there is no doubt that the rich visual imagery of its carvings, with symbols from a variety of religious traditions, will continue to captivate and mystify people for generations to come.