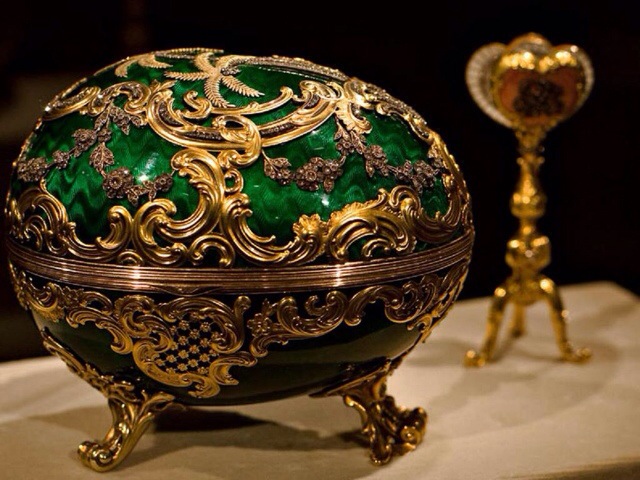 Peter Carl Fabergé (also known as Karl Gustavovich Fabergé) and his brother Agathon were Russian jewellers of French descent based in St. Petersburg. They rapidly became famous for the extraordinary quality and beauty of their work.

In 1885 Tsar Alexander III (House of Romanov) commissioned the production of the gold and enamel ‘Hen Egg’ for his wife the Empress Maria which she adored.

Fabergé was made ‘Goldsmith by Special Appointment to the Imperial Crown’ and over the next 33 years 52 eggs were made for the Russian Royal Family as well as a further 15 for other private buyers.

The 1917 Russian Revolution toppled Tsar Nicholas II who was executed along with much of the royal family in July 1918. Fearing for his safety, Peter Carl Faberge abandoned Russia travelling first to Latvia then Germany and finally Switzerland where he died in Lausene in 1920.

The Fabergé eggs and many other treasures of the Royal family were confiscated and stored in the vaults of the Kremlin Armoury. Some were sold to raise funds for the new regime. Over time eight of the original 52 Imperial eggs have vanished and their whereabouts remain a mystery to this day. A full list of missing eggs is below. In 2007, just one egg, ‘The Rothschild’ was sold at Christies Auction House for $8,9 million.