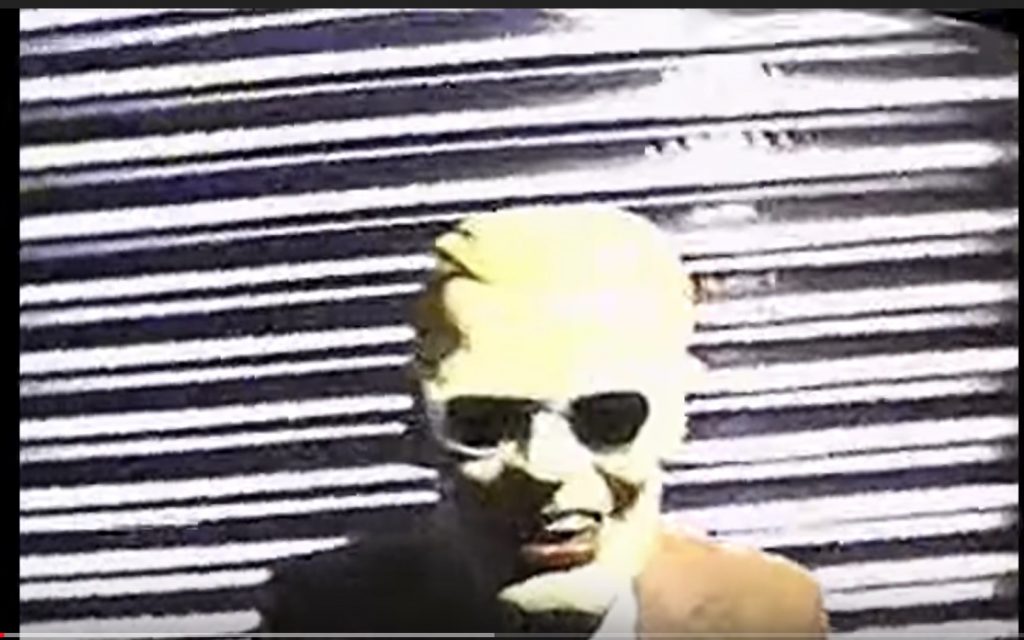 Max Headroom is a fictional British artificial intelligence (AI), known for his wit and stuttering, distorted, electronically sampled voice. He was introduced in early 1984. The character was created by George Stone, Annabel Jankel and Rocky Morton in the mid-1980s, and portrayed by Matt Frewer as “The World’s first computer-generated TV host,” although the computer-generated appearance was achieved with prosthetic makeup and hand-drawn backgrounds, as the computer technology of the time was not sufficiently advanced to achieve the desired effect.

The first occurrence of the signal intrusion took place during WGN-TV (channel 9)’s live telecast of its primetime newscast, The Nine O’Clock News (now known as WGN News at Nine). During highlights from the Chicago Bears’ 30–10 home victory over the Detroit Lions that afternoon in the sports report, the screen went black for 15 seconds, then returned with a person wearing a Max Headroom mask and sunglasses, moving around and jumping. His head was in front of a sheet of moving corrugated metal, which imitated the background effect used in the Max Headroom TV and movie appearances. There was no audio other than a buzzing noise and an oscillating sound. The hijack was stopped after engineers at WGN switched the frequency of their studio link to the John Hancock Center transmitter.

Later that night, around 11:15 p.m. Central Time, during a broadcast of the Doctor Who serial “Horror of Fang Rock”,  WTTW’s signal was hijacked by the same person, apparently, who had broadcast the WGN-TV hijack, this time with distorted and crackling audio.

The show was interrupted by television static, after which the unidentified man wearing the Max Headroom mask and sunglasses appeared, mentioning WGN pundit, Chuck Swirsky, whom he said he was “better than”, going on to call Swirsky a “Freaking Liberal”. The man started to moan, scream and laugh. He continued to laugh and utter various random phrases, including New Coke’s advertising slogan “Catch the Wave” while holding a Pepsi can (Max Headroom was a Coca-Cola spokesperson at the time), then tossed the can down, leaned towards the camera and presented the finger wearing a rubber extension over his middle finger, though the gesture was partially off-screen. The man then retrieved the Pepsi can, and sang “Your love is fading”, removed the rubber extension, and then began humming the theme song to Clutch Cargo, pausing to say “I still see the X” (often misheard as “I stole CBS”), which referred to the final episode of the series, before resuming humming again. He then began to moan painfully, exclaiming about his piles, after which a flatulence sound was heard. He then stated that he had “made a giant masterpiece for all the greatest world newspaper nerds” (the WGN call letters used by the Chicago television station as well as its sister radio station are an abbreviation for “World’s Greatest Newspaper”, in reference to the flagship newspaper of their corporate parent, the Tribune Company’s Chicago Tribune). He then held up a glove and said, “My brother is wearing the other one.” After putting the glove on, he continued, “But it’s dirty! It’s like you got blood stains on it!” He then removed the glove and threw it down.

The picture suddenly cut over to a shot of the man’s lower torso. His buttocks were partly exposed, and he was holding the now-removed mask up to the camera with the rubber extension now placed in the mouth of the mask, howling, “They’re coming to get me!” An unidentified female accomplice wearing a French maid outfit said to him, “Bend over, bitch!” The accomplice then started to spank the man with a flyswatter as the man screamed loudly. The transmission then blacked out for a few seconds before resuming the Doctor Who episode in progress; the hijack lasted for about 90 seconds.

WTTW, which maintained its transmitter atop the Sears Tower, found that its engineers were unable to stop the hijacker due to the fact that there were no engineers on duty at the Sears Tower at the time of the hijacking. The station spokesman Anders Yocom told the Chicago Tribune:

“Technicians monitoring the transmission from WTTW headquarters attempted to take corrective measures, but couldn’t. By the time our people began looking into what was going on, it was over.”

WTTW was able to find copies of the hijacker’s telecast with the help of Doctor Who fans who had been taping the show.