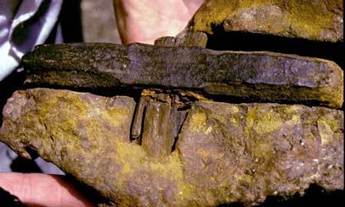 In 1891 there was an even more remarkable find. A woman in Morrisonville Illinois was shovelling coal when a piece broke open in front of her. To her astonishment she found it contained a beautiful gold chain of elaborate workmanship.

” Mrs Culp thought the chain had been dropped accidentally in the coal, but as she undertook to lift the chain up, the idea of its having been recently dropped was shown to be fallacious, for as the lump of coal broke, it separated almost in the middle, and the circular position of the chain placed the two ends near to each other; and as the lumps separated, the middle of the chain became loosened while each end remained fastened to the coal…..”

Nor was the Morrisonville incident the only one of its kind. In 1844 an unidentified gold artifact was discovered in a quarry in England.

Workmen blasting granite, came across the discovery of an item of gold thread about eight feet below the surface. It was embedded in rock thought to be over 60 million years old. Experts sent at the behest of the Times newspaper concluded that the object had been artificially manufactured, but ventured no opinion as to how it could have found itself embedded in rock so unimaginably old