what are the band of holes?

A stretch of thousands of mysterious holes carved into the rock, that lead up a hill, located on the same plateau, not far from the Nazca lines.

These unexplained and highly organized holes range in size from a meter to as much as 20 to 30 ft in diameter and vary in depth from a few inches to 6 to 7 ft.

Some sections of the carvings strangely have holes in rigid and perfect precision, whilst some run in rows that curve up in arches, creating strange staggered lines.

Even more mysterious is that it has been predicated that it took decades to create and no reason has been discovered as to the purpose of the holes. 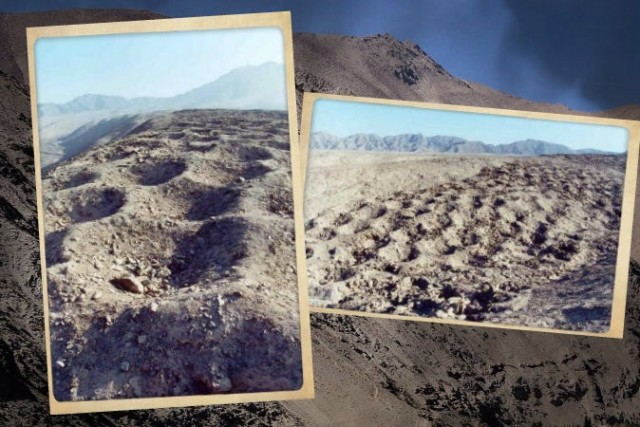 There have not been any artifacts discovered or uncovered to reveal any further information about the holes. Some archaeologists believe that because the holes are “man-sized,” they may be some sort of vertical graves, intended for burying the dead.

However this is unlikely and has not been substantiated by the recovery of any bones, artifacts, or other human remains to indicate a burial site.

Other archaeologists have theorized that the holes were dug to store grain, and other essentials, again this is unlikely.

Considering the quantity of holes, and the depth of each hole, a better method for storage would have been used.

For example, storage containers for grain could have been built with much more ease than the efforts required to carve the holes into the rock.

The holes cover a mile of rocky mountain terrain, with a well-defined beginning and ending point.

The band of holes abruptly comes to an end near an area of land that has an unnaturally darkened color,

Research shows that the darkened area appears to resemble an area that has been destroyed by an explosion.

The holes could have been created by or for extraterrestrial beings, perhaps the holes contained fires to guide ancient aliens who visited Earth.