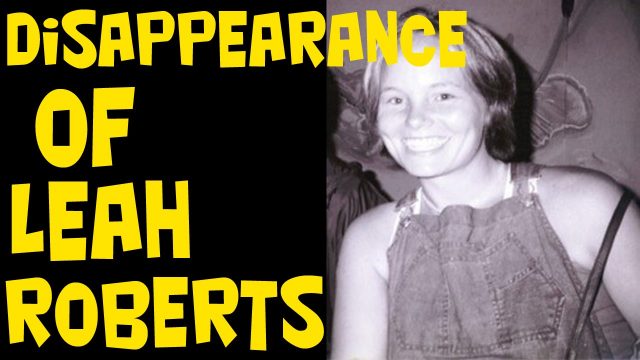 In March 2000, 23 year Leah Roberts disappeared from her home after a tumultuous couple of years in which she had lost both her parents and dropped out of college. Nine days after she first went missing, the wreck of her Jeep was discovered in a remote forest. Several days after this, a man reported a sighting of a young woman wandering disoriented and confused around a gas station some distance away.

After this, no further trace of Leah was ever found.

Before Leah’s disappearance, she seemed to be going through the same kind of soul-searching that would be familiar to many who’ve gone through particularly rough periods in their lives. After dropping out of college, she took up a number of new pursuits including photography, poetry and guitar, and spoke with her friends about emulating Jack Kerouac and going on a road trip west.

None of her friends expected her to leave when she did, however. It was March 9, 2000, and Leah was making plans with friends — including agreeing to do some babysitting the next day. Later in the day, her roommate noticed that Leah had not returned home. She didn’t turn up to babysitting the next day either, and was not home by that evening. Leah was reported missing on Monday March 13.

Everything that remained in Leah’s room suggested that the woman had been planning on leaving on an extended trip — but with the intention to return eventually. Much of her clothing was missing, and she seemed to have taken her cat, but she had left a note bundled with enough money to cover around a month’s worth of rent and expenses. This indicates she had intended to return within this amount of time. The note assured her friends that she wasn’t suicidal, in fact that she was “the opposite”, and mentioned the author Kerouac again.

Leah’s sister Kara had access to her bank accounts at that time, and was able to look into her records. These showed evidence of a trip heading west along Interstate 40, with purchases including gas or food and a motel paid for on her debit card near Memphis, Tennessee. After talking with some of Leah’s friends, Kara concluded that Leah was heading to the Cascade Mountains of Washington, to a place of much beauty that Kerouac had been quite taken with in his novel The Dharma Bums.

At this point, Kara seemed assured that she knew (at least vaguely) where her sister was and what she was doing. She gave up her investigation, simply waiting for Leah to contact her. The last activity on Leah’s accounts occurred on the morning of March 13.

After a few days of silence, Leah’s car had been found in Bellingham, Washington, without Leah inside or around it. A jogger had come across a site where articles of clothing had been strewn by the roadside, with some even tied to trees and branches. At the bottom of a steep embankment off the side of this road was Leah’s smashed-up Jeep. The crash site suggested the Jeep had been travelling fast when it left the road, with signs pointing to a multiple rollover — though no blood or signs of injury were found inside the vehicle. It was even theorised that the crash had been staged.

Inside the vehicle, police found pillows and blankets hung inside the windows, suggesting someone had been living inside at least temporarily. Leah’s passport, checkbook, license and many of her belongings were found scattered in the surrounding area, including cat food and a cat carrier. Valuables and an amount of cash were also located at the crash scene, meaning robbery hadn’t been the cause of the crash, or Leah’s absence.

Searching through Leah’s belongings, police found a ticket stub from a theatre suggesting she had stopped in Bellingham. This line of investigation led them to two men who had dined and conversed with her on March 13. These men claimed that Leah had left the restaurant with a third man, who she called ‘Barry’. Police spent two weeks searching for Leah in the area around the crash, acting under the assumption that she had been injured in the crash and had left the car behind, though no trace of her was found.

The next development came when a man claimed to have seen her, disorientated and confused, in a gas station close to Seattle. Since then, sightings of Leah have been reported, though few of them have proven credible. The only other evidence that was found came years later in 2006, when the crashed Jeep was gone over again. Detectives found that a wire had been cut that would allow the car to accelerate without someone in it pushing the pedal. This meant that the crash could have been staged. Along with this, a fingerprint was found under the hood, along with some male DNA on Leah’s clothes.

Leah has never been officially declared deceased, and some organisations continue to organise events to keep the missing woman in people’s memories. While the leading theory is that she was the victim of foul play and was killed, it’s also possible that she disappeared of her own volition, and is still out there somewhere.