At the time, the case was big news, made bigger by Kubacki’s unwillingness to grant interviews or give any hints as to where he might have been for the missing 15 months. Time passed and the story took on a life of its own, spawning dozens of conspiracy theories ranging from alien abduction, to the mysterious Michigan Triangle, to divine intervention. This is the true story:

One of the strangest missing person case ever recorded in the USA is that of Steven Kubacki. Steven Kubacki went missing for 15 months without a trace. It is then claimed that he woke up in a field wearing strange clothes with no memory of the previous 15 months.

In February 1978, Steven, a student at the time learning German, went missing in the Michigan area, USA in an area known as The Lake Michigan Triangle

The triangle has accounted for numerous mysterious events, beginning in 1891, when a schooner named the Thomas Hume set off across Lake Michigan for lumber.

The Hume disappeared, along with its crew of seven sailors. Not even a trace of the boat was ever found. 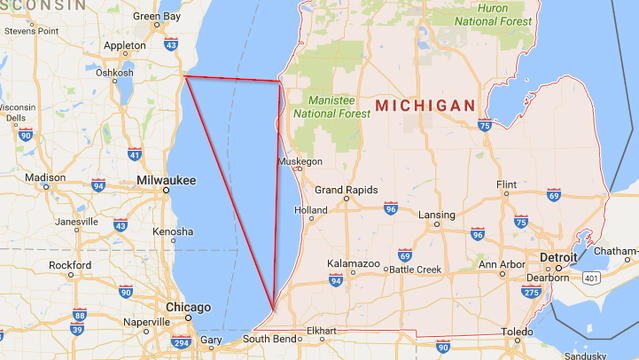 Before he went missing Steven said he was going to go skiing.

He was reported missing by his worried family a day after he was due to return from the trip.

After he went misssing search teams scouted the area he was known to have headed to – they found his skis and his poles on the beach of the Lake Michigan and footprints on the ice leading up to the lake.

Whilst searching for him the rescue crew flew over the area, and it was reported that his footprints appeared to stop at the edge of the ice. The ice was unbroken, and a search of the area revealed no clue as to what had happened to Steven.

Later that day they found his backpack in the same general area as his ski’s.

No other evidence or sign of Steven could be found – it appeared he had just vanished into thin air!

May 5th 1979, 15 months later, Steven walked up to his father’s door, rang the bell and was surprised to discover he had been missing for so lllong. Steven said to his father that he didn’t remember much.

Steven had woken up in Pittsfield, 40 miles from his father’s house, lying in a meadow wearing clothes that weren’t his.

He had a small satchel beside him with maps, that weren’t his

Where he woke up was 700 miles from Lake Michigan.

Reporters asked him repeatedly if he would talk to someone. He said he didn’t need to, because he didn’t have any psychological problems and nothing to say about the time he was missing.

After 1983, Steven got a masters in linguistics, and a PhD in clinical psychology.

Other strange events in the triangle

In 1921, 11 people inside the Rosa Belle ship disappeared and their ship was found overturned in Lake Michigan.

The ship had been damaged in a collision, but no other ship had reported an accident and no other wreck was ever found.

The bizarre case of Captain George R. Donner is one of the more mysterious triangle cases.

On April 28, 1937, Captain Donner vanished from his cabin, after guiding his ship through icy waters.

The Captain went to his cabin to rest, and about three hours later, a crew member went to alert him that they were nearing the port.

The door was locked from the inside. The mate broke into the cabin, only to find it was empty.

A search turned up no clues, and Donner’s disappearance remains unsolved.

The disappearance of Northwest Flight 2501

One of the most mysterious cases over Lake Michigan happened in 1950 when Northwest Airlines flight 2501, which was carrying 58 people, crashed into Lake Michigan.

The plane was never found.

At the time, it was the deadliest commercial airliner accident in American history.

The pilot had just requested to descend to 2,500 “because of a severe electrical storm which was lashing the lake with high velocity winds” when the plane disappeared from radar.

To this day, the plane wreckage has not been found, and the cause of the crash remains unknown.

About two hours after the last communication with flight 2501, two police officers reported seeing a strange red light hovering over Lake Michigan, and disappearing after 10 minutes, leading some to believe a UFO was to blame.