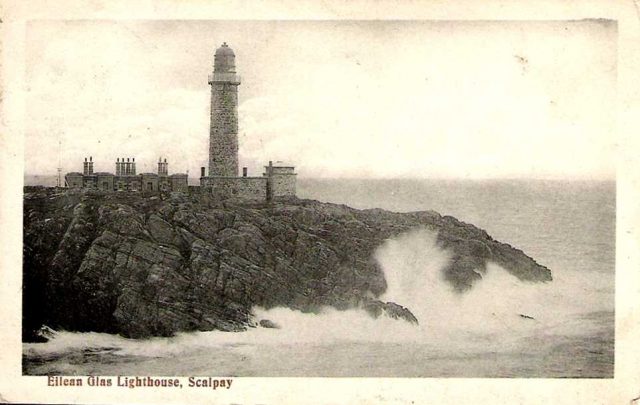 the 120 year old mystery of Eilean Mor, a small island off the coast of Scotland that is home to nothing but a lighthouse. In 1900, it’s three keepers vanished and have never been found.

On the 26th December 1900, a small ship was making its way to the Flannan Islands in the remote Outer Hebridies. Its destination was the lighthouse at Eilean Mor, a remote island which (apart from its lighthouse keepers) was completely uninhabited.

Although uninhabited, the island has always sparked people’s interest. It is named after St. Flannen, a 6th century Irish Bishop who later became a saint. He built a chapel on the island and for centuries shepherds used to bring over sheep to the island to graze but would never stay the night, fearful of the spirits believed to haunt that remote spot.

Captain James Harvey was in charge of the ship which was also carrying Jospeph Moore, a replacement lifehouse keeper. As the ship reached the landing platform, Captain Harvey was surprised not to see anyone waiting for their arrival. He blew his horn and sent up a warning flare to attract attention.

There was no response.

Joseph Moore then rowed ashore and ascended up the steep set of stairs that leaded up to the lighthouse. According to reports from Moore himself, the replacement lighthouse keeper suffered an overwhelming sense of foreboding on his long walk up to the top of the cliff.


Once at the lighthouse, Moore noticed something was immediately wrong; the door to the lighthouse was unlocked and in the entrance hall two of the three oil skinned coats were missing. Moore continued onto the kitchen area where he found half eaten food and an overturned chair, almost as if someone had jumped from their seat in a hurry. To add to this peculiar scene, the kitchen clock had also stopped.

Moore continued to search the rest of the lighthouse but found no sign of the lighthouse keepers. He ran back to the ship to inform Captain Harvey, who subsequently ordered a search of the islands for the missing men. No-one was found.

Harvey quickly sent back a telegram to the mainland, which in turn was forwarded to the Northern Lighthouse Board Headquarters in Edinburgh. The telegraph read:

A dreadful accident has happened at Flannans. The three Keepers, Ducat, Marshall and the occasional have disappeared from the island. On our arrival there this afternoon no sign of life was to be seen on the Island.

Fired a rocket but, as no response was made, managed to land Moore, who went up to the Station but found no Keepers there. The clocks were stopped and other signs indicated that the accident must have happened about a week ago. Poor fellows they must been blown over the cliffs or drowned trying to secure a crane or something like that.

Night coming on, we could not wait to make something as to their fate.

I have left Moore, MacDonald, Buoymaster and two Seamen on the island to keep the light burning until you make other arrangements. Will not return to Oban until I hear from you. I have repeated this wire to Muirhead in case you are not at home. I will remain at the telegraph office tonight until it closes, if you wish to wire me.

A few days later, Robert Muirhead, the board’s supernatant who both recruited and knew all three men personally, departed for the island to investigate the disappearances.

His investigation of the lighthouse found nothing over and above what Moore had already reported. That is, except for the lighthouse’s log…

Muirhead immediately noticed that the last few days of entries were unusual. On the 12th December, Thomas Marshall, the second assistant, wrote of ‘severe winds the likes of which I have never seen before in twenty years’. He also noticed that James Ducat, the Principal Keeper, had been ‘very quiet’ and that the third assistant, William McArthur, had been crying.

What is strange about the final remark was that William McArthur was a seasoned mariner, and was known on the Scottish mainland as a tough brawler. Why would he be crying about a storm?

Log entries on the 13th December stated that the storm was still raging, and that all three men had been praying. But why would three experienced lighthouse keepers, safely situated on a brand new lighthouse that was 150 feet above sea level, be praying for a storm to stop? They should have been perfectly safe.

Even more peculiar is that there were no reported storms in the area on the 12th, 13th and 14th of December. In fact, the weather was calm, and the storms that were to batter the island didn’t hit until December 17th.

After reading the logs, Muirhead’s attention turned to the remaining oil skinned coat that had been left in the entrance hall. Why, in the bitter cold winter, had one of the lighthouse keepers ventured out without his coat? Furthermore, why had all three lighthouse staff left their posts at the same time, when rules and regulations strictly prohibited it? 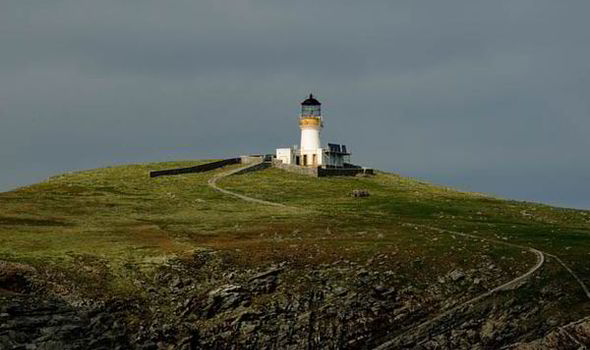 Further clues were found down by the landing platform. Here Muirhead noticed ropes strewn all over the rocks, ropes which were usually held in a brown crate 70 feet above the platform on a supply crane. Perhaps the crate had been dislodged and knocked down, and the lighthouse keepers were attempting to retrieve them when an unexpected wave came and washed them out to sea? This was the first and most likely theory, and as such Muirhead included it in his official report to the Northern Lighthouse Board.

But this explanation left some people in the Northern Lighthouse Board unconvinced. For one, why had none of the bodies been washed ashore? Why had one of the men left the lighthouse without taking his coat, especially since this was December in the Outer Hebridies? Why had three experienced lighthouse keepers been taken unaware by a wave?

Although these were all good questions, the most pertinent and persistent question was around the weather conditions at the time; the seas should have been calm! They were sure of this as the lighthouse could be seen from the nearby Isle of Lewis, and any bad weather would have obscured it from view.

Over the following decades, subsequent lighthouse keepers at Eilean Mor have reported strange voices in the wind, calling out the names of the three dead men. Theories about their disappearance have ranged from foreign invaders capturing the men, all the way through to alien abductions! Whatever the reason for their disappearance, something (or someone) snatched those three men from the rock of Eilean Mor on that winter’s day over 100 years ago.