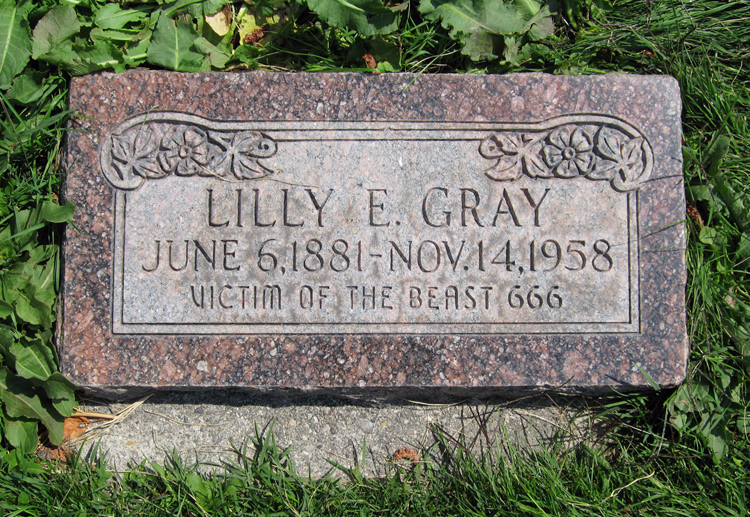 In a quiet, unremarkable area in a Salt Lake City cemetery sits a modest gravestone bearing an epitaph so bizarre that for many years it has inspired rumors, speculation, curiosity, and fear in everyone who comes across its eerie message.

The grave of Lilly E. Gray stands in the Salt Lake City Cemetery. It’s a simple, plain flat stone that lists here birth date and death date (June 6, 1881 and November 14, 1958). It’s what’s written next to these figures than makes this stone legendary: Victim of the Beast 666.

That’s all that is carved on Lilly E. Gray’s grave, except for a few flowers (primroses, to be exact, which are often referred to as “The Devil’s Lantern.”) According to hospital records, she died of natural causes. Her short obituary listed nothing extraordinary. In other words, there are no records or hints to explain this mysterious message.

In Lily’s brief obituary, we learn that her death at age 77 (or 78) was due to natural causes.  Who, then, would request such an ominous inscription for her grave?

Lily Gray’s husband, Elmer Lewis Gray, might hold some of the answers.  Lily married Elmer when she was 72 years old, and he may have been incarcerated prior to their marriage.   Richelle Hawks who investigated this mystery reveals, “I have found records for an Elmer L. Gray’s ‘Criminal Pardons Application’ in 1947. I have also found a 1901 Ogden Standard newspaper clipping in which a man named Elmer Gray was arrested and sentenced to ‘five days on the rock pile’ for stealing an umbrella valued at $3.50, from the Paine and Hurst Company. I have no way of knowing if this is the same Elmer Gray, but the date and his age seems to fit.”

Much speculation that Elmer was the beast in question in Lilly’s life. Was he responsible for her death? Did one of Lilly’s friends or relatives intend the inscription to condemn Elmer?

More clues might be found in the decoration on the tombstones of both Lily and Elmer.  The flower on Lily’s grave is an evening primrose, and, according to cemetery symbolism, the primrose, when used on tombstones, symbolizes youth, hope, memory, eternal love, and sadness.  The primrose’s nickname, however, is “Devil’s Lantern”.  On Elmer’s tombstone, however, we find daffodils (Narcissus), which are used in funerary art, and can have such negative connotations as narcissism, self-love, and vanity.

Some propose that Lilly was a victim of a car wreck on Highway 666, which stretched through part of Utah. The highway was famous not only for its name but also the high rate of fatal accidents that occurred on its desolate stretches. During the period of time Lilly reportedly lived in Utah she could have traveled on the highway, so the theory cannot be completely ruled out.

Another theory suggests that Lilly was involved in Aleister Crowley’s following in Salt Lake City. Crowley was a notorious occultist in the first part of the twentieth century. It has been said Crowley referred to himself as “the Beast 666”, giving the theory that Lilly had been victimized by him in her husband’s or other survivors’ eyes some weight. But there exists information that Lilly did not move to Salt Lake City until 1950. Crowley died in 1947, which would have made it impossible for Lilly to have known him while in Salt Lake City.

Perhaps the most intriguing and plausible theory yet involves her husband, Elmer, who may have had mental problems. There are records of an Elmer Gray who had been arrested in Ogden for stealing an umbrella, but searches of vital records has uncovered multiple Elmer Gray’s living in Utah at the time. An Elmer Gray’s application for criminal pardon in Utah hints at an anti-government belief system. Was it possible Elmer blamed the government for Lilly’s death, referring to it as the Beast 666?

Not enough information is readily available to come to a final conclusion on Lilly’s case. In 2003, the Deseret News interviewed a researcher at the Utah Historical Society, who explained they have not been able to figure out why the strange inscription is on Lilly’s gravestone.

The investigation is not closed – in the future there will be an update as several potential leads are vetted in an effort to uncover just who Lilly was and who or what the Beast 666 was.

Nobody knows the answers. Only the bare facts remain. Lilly moved to the area in 1950, only eight years before her death, and her grave has grown into a local Salt Lake City legend. And this strange epitaph deserves its prominent place in USA folklore.