VOTTOVAARA, KARELIA – Vottovaara is a mysterious mountain in Karelia, Eastern Europe. It is over 400 metres high. The mystery surrounding the Vottovaara mountain area are the incredible structures found there, that seem to be made by an ancient civilization that has since disappeared.

At Vottovaara there are about 1500 rocks piled up in unusual formations. Some are clearly not natural, while others could be either natural or man-made. For example there is a structure that looks like a cliff but also seems too precisely ordered to be ‘just’ a cliff. There are large stone box-like structures that could just as well be sarcophagi. There are perfectly round stones as well.

Vottovaara also features a stairs-like formation. Some say that an earthquake could have done this in ancient times (the site itself is dated to be 2,3 – 2,1 million years old). But the structure looks like an ascent to a temple or seats of an amphitheater. Some blocks seem very precisely cut, while others have a more natural, irregular form. Some of the rocks are huge, like the ones at Baalbek. On the other hand there are huge underground spaces at Vottovaara, often filled with water. 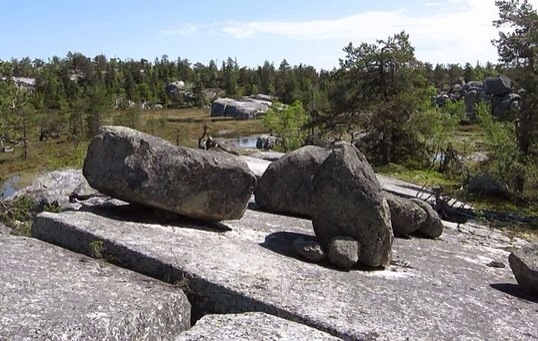 On the other hand, the Vottovaara site is full of so-called ‘seids’, ancient sacred objects and constructions. It is commonly assumed that these were set up by the ancestors of the Sami people (Laps). The site has many petroglyphs as well.

If you look at the Vottovaara site from a distance, something else comes to mind. Like at Puma Punku, it seems there has been large-scale destruction. Some stones have remained in their original position and shape, but many seem completely blasted apart. It seems like a major explosion took place here, an annihilation, more than even an earthquake would cause. Could there have been an advanced civilization, that for some reason left and traces were wiped out?

There are other, similar constructions in Karelia. The number of inhabitants of this region must have been huge, more than we can imagine, more than lived on the entire planet in ancient times. Or was all this built using alien technologies? They probably knew techniques that we don’t know today. 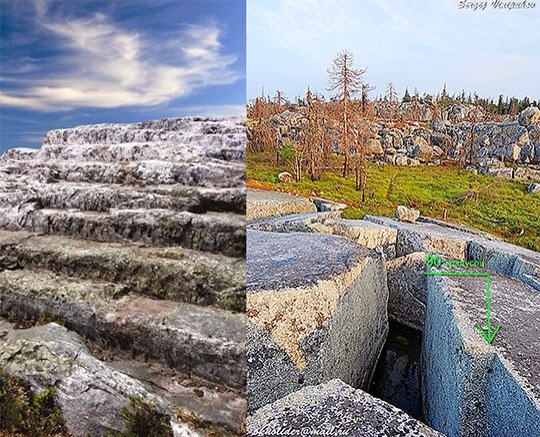