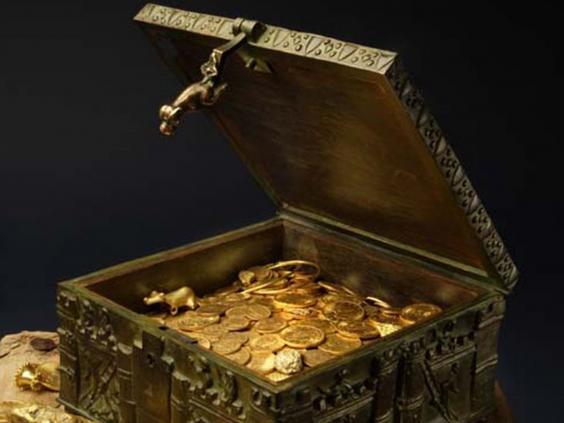 When wealthy art dealer Forrest Fenn contracted cancer, he resolved to leave a legacy that would remind people he had once been here. He buried more than $1 million worth of gold and treasure in a mountain range north of Santa Fe. In 2011, Fenn released a memoir containing nine riddles that give away the location of the buried treasure.

The treasure chest is filled with golden coins, nuggets, statues, and jewelry that have become more valuable since Fenn buried them. People have literally risked their lives trying to find Fenn’s treasure. In 2016, a man named Randy Bilyeu died while hunting for the gold.

“The treasure is not hidden in a dangerous place,” Forrest Fenn announced after Bilyeu’s death. “I’ve said many times not to look for the treasure any place where an 80-year-old man couldn’t put it.”

Several years ago, an adventuresome New Mexico art dealer named Forrest Fenn filled a 12th-century bronze chest with around $2m (£1.4m) worth of gold nuggets, ancient artifacts and jewellery, and secreted it somewhere in the Rocky Mountains north of Santa Fe. He wrote a poem containing clues to its whereabouts in his self-published 2010 memoir, The Thrill of the Chase. Since then, he estimates 65,000 people have gone looking for the so-called “Fenn Treasure”.

Now, however, Mr Fenn himself has joined the search – not for his treasure, but for a treasure hunter. On 5 January, in the depths of winter, 54-year-old Randy Bilyeu set off along the chilly Rio Grande in a raft with his dog Leo and a GPS device, bound for what he believed was the location of the chest. Mr Bilyeu moved to nearby Colorado two years ago to devote himself to finding the treasure. His dog and the raft were found on 15 January, but he has not been seen since.

The missing man reportedly left maps in his car, indicating the area he planned to search, as well as a sandwich, suggesting he did not plan to be out for long.

Mr Fenn says he is certain the box is still out there and, despite Mr Bilyeu’s disappearance, he does not intend to disclose its whereabouts, saying it would not be fair to the enthusiasts who have spent so long looking for it. “The treasure could be found this summer or many summers in the future,” he said. “It is out of my hands now. It will not be happened upon. Whoever finds it will have figured out the clues in my poem.” 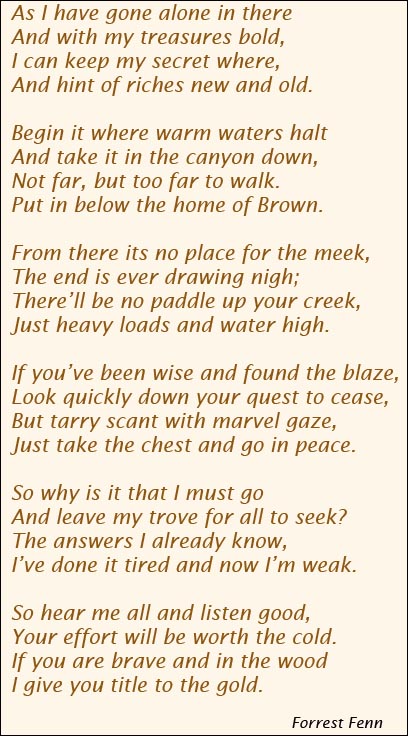