The Mystery of MH370

Malaysia airlines flight MH370 “probably crashed in the southern Indian Ocean, thousands of miles from the plane’s original flight path”, authorities said, 16 days after the plane was first reported missing. MH370, a Boeing 777-200er was carrying 239 passengers and crew from Kuala Lumpur to Beijing when it vanished on Saturday, March 8, 2014.

The captain was 53-year-old Zaharie Ahmad Shah from Penang; he had joined Malaysia Airlines in 1981 and recorded 18,365 hours of flying time.

Now a year has gone by, and we still have no further evidence of what happenend to MH370

Flight 370 last made voice contact with air traffic control at 01:19 MYT (17:19 UTC, 7 March) when it was over the South China Sea, less than an hour after takeoff.

The aircraft disappeared from air traffic controllers’ radar screens at 01:21.

After 01:21 the transponder on Flight 370 was no longer functioning, and evidence suggests it was switched off by the flight crew.

The captain of another aircraft attempted to reach the crew of Flight 370 “just after 01.30” using the international distress frequency to relay Vietnamese air traffic control’s request for the crew to contact them; the captain said he was able to establish contact, but just heard “mumbling” and static.

Malaysian military radar continued to track Flight 370 as it deviated from its planned flight path and crossed the Malay Peninsula, but failed to report it.

This military radar shows the aircraft made a sharp turn westwards and headed towards a waypoint called VAMPI in the Strait of Malacca.

Evidence suggests this abrupt U-turn was programmed into the on-board computer well before the last communication with air traffic controllers at 01.19.

Flight 370 left the range of Malaysian military radar at 02:22 while over the Andaman Sea, 200 nautical miles northwest of Penang in northwestern Malaysia.

Just as the flight left the military radar range, at 02:25, the onboard satellite communication system sent a ‘log-on request’ message.

After it logged on, the satellite system aboard the aircraft responded to hourly status requests from Inmarsat.

(later on 15 March, Officials announced that communications between Flight 370 and the communications satellite operated by Inmarsat indicate the plane continued to fly for several more hours and was along one of two corridors at the time of its last communication)

Two ground-to-aircraft phone calls, at 02:39 and 07:13, connected, but went unanswered by the cockpit. It is unclear why only two attempts had been made.

The final status request and aircraft acknowledgement occurred at 08:10. The aircraft sent a log-on request at 08:19:29 which was followed, after a response from the ground station, by a ‘log-on acknowledgement’ message at 08:19:37.

This was the last contact with the plane, which was about 7 1/2 hours after takeoff.

Vanished – without a trace 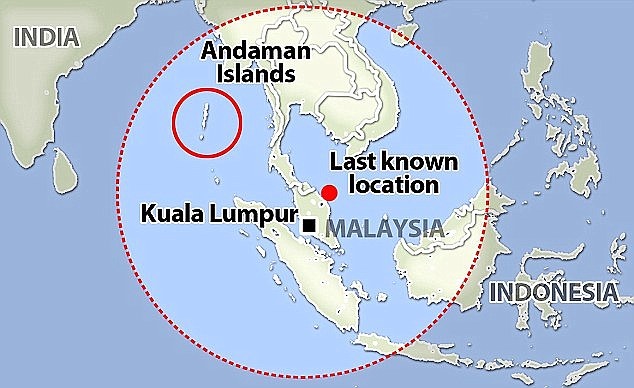 Malaysia Airlines issued a media statement at 07:24, one hour after the scheduled arrival time of the flight at Beijing, stating that contact with the flight had been lost by Malaysian ATC at 02:40 and that the government had initiated search and rescue operations.

The time when (radar) contact was lost was later corrected to 01:21. Neither the crew nor the aircraft’s communication systems relayed a distress signal, They stated no indications of bad weather, or technical problems before the aircraft vanished from radar screens.

Passenger involvement – Did a passenger hijack the flight?

Two men identified on the passenger manifest, an Austrian and an Italian, had reported their passports stolen in 2012 and 2013, respectively.

Interpol stated that both passports were listed on its database of lost and stolen passports, and that no check had been made against its database.

The two one-way tickets purchased for the holders of the stolen passports were booked through China Southern Airlines.

It was reported that an Iranian had ordered the cheapest tickets to Europe via telephone in Bangkok, Thailand. The tickets were paid for in cash.

The two passengers were later identified as Iranian men, one aged 19 and the other 29, who had entered Malaysia on 28 February using valid Iranian passports.

The head of Interpol said the organisation was “inclined to conclude that it was not a terrorist incident”.

One other passenger who worked as a flight engineer for a Swiss jet charter company, was briefly suspected as potential hijacker because he was thought to have the relevant skill set!

Crew involvement: Did the flight crew hijack the aircraft?

Police searched the homes of the pilot and co-pilot, on suspicion that those in the cockpit had been responsible for the aircraft’s disappearance.

The United States’ Federal Bureau of Investigation reconstructed the deleted data from the pilot’s home flight simulator and a Malaysian government spokesman indicated that “nothing sinister” had been found on it. However later reports contradict this.

Contradicting an earlier statement about data from Capt. Shah’s flight simulator, The Sunday Times reported that among deleted flight paths performed on the flight simulator investigators found a flight path into the Southern Ocean where a simulated landing was made on an island with a small runway.

Investigators then claimed they believe someone in the cockpit of Flight 370 re-programmed the aircraft’s autopilot before it travelled south across the Indian Ocean, raising further suspicion the disappearance was caused by the captain or copilot.

Cargo – What was the flight carrying?

On 17 March, MAS chief executive, Ahmad Jauhari Yahya, indicated that the aircraft was carrying only three to four tonnes/tons of mangosteens and said that nothing it transported was dangerous.

Three days later, however, he confirmed that potentially flammable batteries, identified as lithium-ion, were on board.

Flight Recorders – Did they detect them?

Whilst search crews made claims of detecting the transmission from the black box, no evidence has been found to warrant the claims.

The search for the flight recorders was rushed, due to the 30-day battery life of the underwater locator beacons (ULBs) attached to them.

Even if the flight recorders are located, the cockpit voice recorder memory only has capacity to store two hours of data, continuously recording over the oldest data.

Conspiracies and other possible causes

Many claim that the Russians secretly landed MH370 at a space port in Kazakhstan, and according to them, this was on Putins orders. Why he would want to do this is not so clear.

A catastrophic event such as a fire disabling much of the equipment resulted in the pilots turning the plane back towards the Malaysian peninsula in the hope of landing at the nearest airport. Although this is still likely, no evidence gives any indication of a problem with the plane, in fact the evidence suggests otherwise.

Shot down by the U.S. who feared terror attack on Diego Garcia

The Boeing 777 was shot down by the Americans who feared the aircraft had been hijacked and was about to be used to attack the U.S. military base on Diego Garcia atoll in the Indian Ocean.

The former French airline director Marc Dugain said he had been warned by British intelligence that he was taking risks by investigating this angle.

Suggestions that this technology included “cloacking” “time travel” or other weired stuff have no real evidence.

A plot to hijack the aircraft and hide it in a remote hangar – to be used at a later date for an evil purpose.

The ‘hideouts’ include a remote area of north west Australia over which no other aircraft fly, disused wartime air strips on islands and one of the former Soviet satellite nations.

Aside from a hijacking team being able to hold 239 passengers and crew hostage for almost a year without a scrap of evidence to suggest that this had happened is the question why the plane hasn’t been put into operation for a wicked plot by now.

Following on from remote hangar conspiracy theory is the claim in Russian newspaper, Moskovsky Komsomolets, that it had been told by a military source that the plane is in Afghanistan after being hijacked by terrorists, the leader being a person called Hitch.

The passengers, it is claimed, have been divided into seven groups and are living in mud huts near the border with Pakistan.

But to have reached Afghanistan, MH370 would have had to fly through the airspace of several countries and it would have been picked up by their radar because it would have broken away from regular, plotted air routes.

The CIA know, says Malaysia’s former Prome Minister, Mahathir Mohamad. He claimed on his blog that there has been a cover up and the CIA and Malaysia know exactly what happened to the plane.

‘Airplanes don’t just disappear. Certainly not these days with all the powerful communication systems, radio and satellite tracking and film-less cameras which operate almost indefinitely and possess huge storage capacities,’ he wrote.

Dr Mahathir, 88, who was Malaysia’s prime minister between 1981 and 2003, said the missing flight’s communication system ‘must have been disabled’.

‘Or else the flight of MH370 would have been tracked by satellites which normally provide data on all commercial flights, inclusive of data on location, kind of aircraft, flight number, departure airport and destination.

Just what the CIA know is unclear!

The mystery remains, and our prays go out to the families and friends of MH370