The Forrest Fenn Treasure is a treasure reportedly worth more than one million dollars that supposedly hidden by art dealer and author Forrest Fenn in the Rocky Mountains.

According to Fenn, many people have claimed to have found the treasure, but no one has provided any evidence to him supporting their claim.

As of 20 August 2016 Fenn has stated that to his knowledge it is still not found. In May 2017, Forrest Fenn was asked “Has anyone determined the nine clues and what they represent?” His response was “I don’t know that anybody has told me the clues in the right order,” leading to speculation all of the clues have been solved but the chest remains hidden. Forrest reconfirmed searchers have been within 200 feet of the treasure and many within 500 feet.

Forrest Fenn operated an art gallery with his wife, Peggy, after retiring from the United States Air Force. The gallery was located in Santa Fe, New Mexico, and sold everything from artifacts to fine art and was quite successful. In 1988, Fenn was diagnosed with cancer and came up with the idea during this illness to hide a chest full of treasure for anyone to go find. He filled the chest with “treasure” containing gold nuggets, rare coins, jewelry and gemstones, along with an olive jar holding his autobiography. He intended to hide it and end his life nearby, with the treasure as a legacy.

However, he survived his illness and waited until he was 79 or 80 to hide the treasure.

The ornate, Romanesque box is 10-by-10 inches and weighs about 40 pounds when loaded. Fenn has only revealed that it is hidden in the Rocky Mountains, somewhere between Santa Fe and the Canadian border at an elevation above 5,000 feet. It’s not in a mine, a graveyard or near a structure. For further clues, you have to read the poem below: 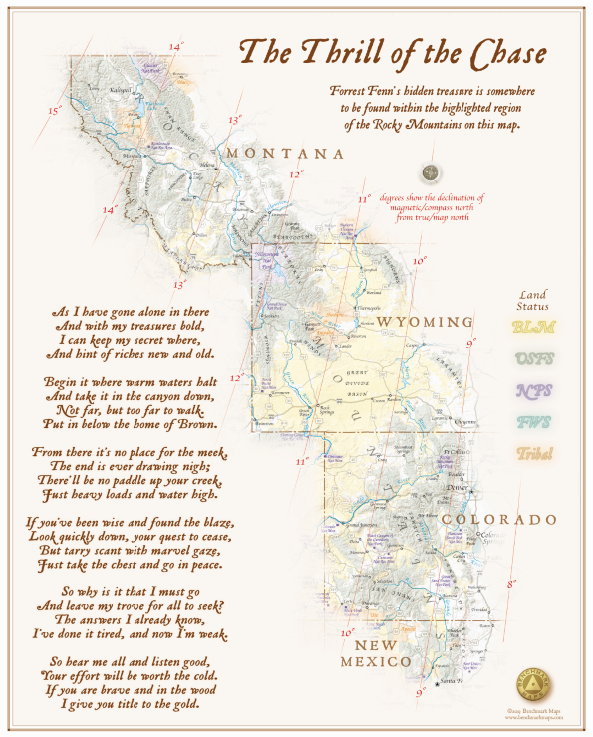 Two people have died while searching for the treasure.

Randy Bilyeu who went missing in January 2016 and was later found dead in July of that year. As a result, Bilyeu’s ex-wife told others she thought the Fenn Treasure was a hoax.

Pastor Paris Wallace of Grand Junction told family members he was searching for a buried treasure, and later failed to show up for a planned family meeting Wednesday June 14, 2017. His car was found parked near the Taos Junction Bridge and his body was subsequently found 5-7 miles downstream.

Two years ago, Fenn told CBS’ Sunday Morning that he avoided hiding the treasure in the old mines in the area because they are too dangerous,

As for the possibility of concluding the search for treasure based on the most recent tragedy and the response to it, he noted, “I have not made any decisions. What do you say to the 100,000 people who have searched and want to continue?”

According to Fenn the bronze circa 1100 AD chest – named Indulgence which is worth a small fortune on its own – contains: