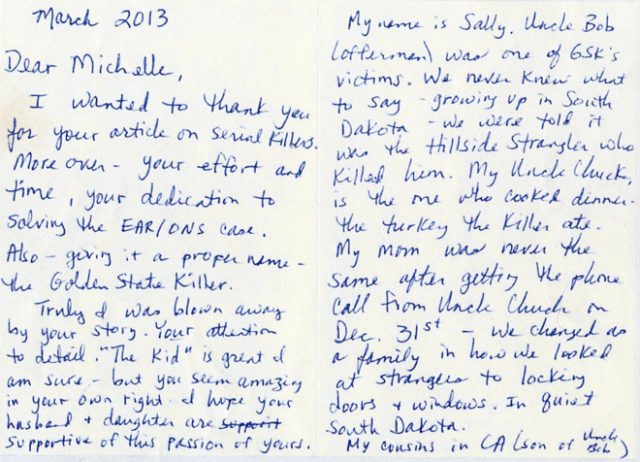 The Original Night Stalker is a media epithet for an unidentified serial killer and serial rapist who committed 50 rapes in Northern California during the mid-1970s and murdered twelve people in Southern California from 1979 through 1986.

Other monikers include the East Area Rapist, the Diamond Knot Killer, and since 2013, he has also been referred to as the Golden State Killer.

This name was coined to the unknown individual who was called The East Area Rapist and The Original Night Stalker. This person was given a plethora of names because there was a great decision they made to move across California, change their M.O. of violent acts, and continue on with their spree from 1976-1986. The changes this perpetrator made were so drastic that police officials were unaware that it was the same person committing the crimes until there was a DNA connection in the year 2000.

The crimes initially centered on the then unincorporated areas of Carmichael, Citrus Heights and Rancho Cordova, all east of Sacramento, where at least fifty women were raped between June 18, 1976 and July 5, 1979.

In 2001, several of the Northern California rapes were linked by DNA to murders in Southern California. All of the DNA-linked assaults occurred in Contra Costa County but the distinctive modus operandi (MO) of the rapist makes it very likely the same man was also responsible for the attacks in the Sacramento area. His last crime, the only one after 1981, took place in 1986.

The Original Night Stalker has never been apprehended. Several suspects have been cleared through DNA, alibi, or other investigative means and methods.

On June 15, 2016, the FBI and local law enforcement agencies held a news conference to announce a nationwide effort and a US$50,000 reward for his capture. They plan to erect electronic billboards nationwide and other forms of exposure for the push.

This particular killer is notoriously known to conduct high surveillance on his victims and thoroughly plan out attacks against them before he took any type of action. It got to the point where the GSK would go into the homes of their victims while they were away and plant a few objects and tools around their home weeks prior to their attack.

Some investigators also suspect the same perpetrator in three other murders, two in Rancho Cordova and one in Visalia.

In 1977, a creepy letter was sent to the Sacramento Bee. This letter was supposedly written by the Golden State Killer and they titled it, “Excitement’s Cave”. Within the letter, the author wrote about how there was some type of cinematic portrayal for the crimes they have committed and that they weren’t afraid of “tough looking men”, since they did attack couples at random times. Instead of being afraid of these men, the killer viewed them as victims.

Here are just a few lines from the letter the killer wrote:

“To make a movie of my life
That will pay for my planned exile.
Just now I’d like to add the wife
Of a Mafia lord to my file.”

Discover more about this case :