Strange out of place bones

The ‘Guadeloupe Woman’ is a well-authenticated discovery which has been in the British Museum for over half a century. In 1812, on the coast of the French Caribbean island of Guadeloupe, a fully human skeleton was found, complete in every respect except for the feet and head. It belonged to a woman about 5 foot 2 inches tall. 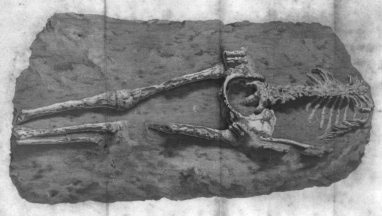 What makes it of great significance is the fact that this skeleton was found inside extremely hard, very old limestone, which was part of a formation more than a mile [1.609 km] in length! Modern geological dating places this formation at 28 million years old—which is 25 million years before modern man is supposed to have first appeared on earth!

Since such a date for a regular person does not fit evolutionary theory, you will not find “Guadeloupe Woman” mentioned in the Hominid textbooks. To do so would be to disprove evolutionary dating of rock formations.

When the two-ton limestone block, containing Guadeloupe Woman, was first put on exhibit in the British Museum in 1812, it was displayed as a proof of the Genesis Flood. But that was 20 years before Lyell and nearly 50 years before Darwin. In 1881, the exhibit was quietly taken down to the basement and remains there to this day.