It is believed that the ancient, mysterious and hauntingly beautiful site of Petra in Jordan has been inhabited (in one way or another) for approximately 9000 years although its existence was kept secret from the modern West until 1812, when Swiss explorer Johann Ludwig Burckhardt “rediscovered it” and revealed its magnificence to the world. Petra – Jordan was designated a World Heritage Site in 1985 and it has been described as “One of the most precious cultural properties of man’s cultural heritage”, by UNESCO. In Arab tradition, Petra is the place where Moses struck a rock with his staff and water came forth, and where his sister, Miriam, is buried.

The word Petra (as with Peter) means “rock” and is derived from the Greek and Arabic language. It is a wonderfully appropriate name as this ancient city is literally carved from the rose-red sandstone hills and outcrops.

THE ANCIENT (LOST) CITY OF PETRA IN JORDAN

Although Petra in jordan is most commonly associated with the Nabataeans, it has been occupied by many different tribes and nations over the millennia. The true mystery of Petra (the lost city) is just how little is known about its history although this is likely to change as each year new studies and excavations slowly reveal the secrets of the place. Evidence of Neolithic habitation of jordan and Petra in the form of six ascending rows of dwellings has been discovered near Baida and suggests that it may be one of the oldest recorded known sites of human habitation in the world. 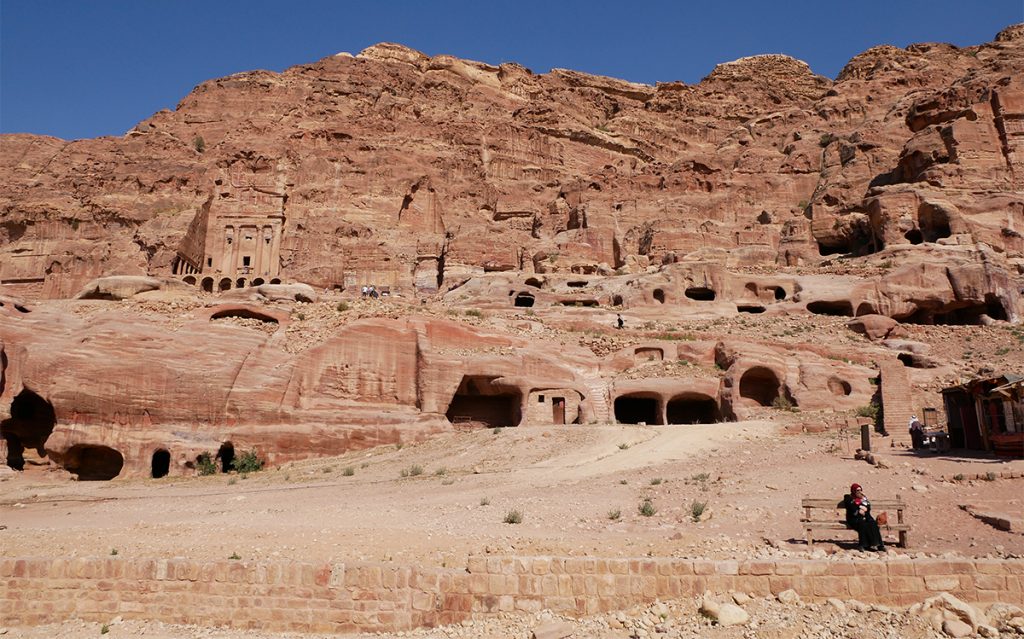 Made famous in the film Indiana Jones and the last Crusade

It has proven impossible to accurately identify when the history of Petra began in Jordan. Tradition has it that the first recorded people to live in the area were the cave-dwelling Horites. It is believed that the Edomites settled in the region during the first millennium B.C. There is a reference in the Bible that they were one of the nations that refused to permit the wandering Jews lead by Moses to enter their lands.

The Edomites undertook a complete and systematic takeover of the region (Jordan) and established a stronghold that included the plains of the Umm al Biyarah plateau. The archeological remains of many dwellings that date from the 7th century B.C. have been found in the area. In addition, the remains of cisterns for the collection of rain water dating from this time indicate that the occupants were already experimenting with the water management systems that were to become so important to the success of Petra, the city, in the future centuries. The nation of Edom is known to have existed back to the 8th or 9th century BC. The Old Testament dates it back several centuries further. Recent archaeological evidence may indicate an Edomite nation existed as long ago as the 11th century BC, but the topic remains controversial.

(It is worth noting that in keeping with the mysterious origins of Petra, the American Museum of Natural History (website) contradicts the belief that Petra in Jordan was also Edom. A quote from their website on Petra states: “Petra’s location in the Holy Land of Arabs, Christians and Jews added enormously to its allure. Some writers identified Petra — wrongly — with ancient Edom, cursed in the Old Testament for having barred Moses and the Israelites. In long-abandoned Petra, many visitors saw powerful confirmation of the prophet Jeremiah’s words: “Edom shall be a desolation and every one that goeth by it shall be astonished.”)

During the 4th century B.C. a new nation emerged in the region – The Nabataeans. Little is known about the origin of these people but it is believed that they were part of a migration from the south of the Arabian Peninsula. This group progressively took control of what is today southern Jordan and established a sophisticated trading network with Petra as their Capital City.