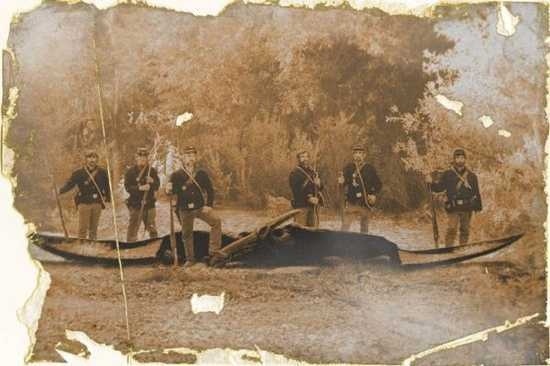 This is a real picture, but is it a hoax?

Pteranodon is a genus of pterosaurs that included some of the largest known flying reptiles. They held a wingspan of over 6 meters (20 ft) and existed in North America, specifically present day Kansas, Alabama, Nebraska, Wyoming, and South Dakota.

For over 200 years, people in these areas of the United States have reported enormous birds. The bird sightings are so prevalent that the creatures have been given the name Thunderbirds, which is taken from Native American mythology. In many cases, Thunderbird reports are accompanied by large footprints.

Probably the most controversial report surfaced on July 25, 1977, when a group of three children from Lawndale, Illinois, claimed that two giant birds chased them and then grabbed a ten-year-old boy named Marlon Lowe.

One of the birds reportedly clamped down on Lowe’s shoulder with its claws, lifted him about two feet off the ground, carried him some distance, and then released him. Thunderbird sightings continue to intrigue cryptozoologists to this day.

The creatures are said to have lizard-like features, which is similar to the extinct pterosaurs. In the 1950s, an unusual photograph was published in a “believe it or not” type book in the U.S. The picture shows a collection of American Civil War soldiers standing over an enormous bird carcass. The carcass holds a strong resemblance to a Pteranodon.

According to the story, the bird was shot down by soldiers during the American Civil War in 1864 near the city of Vicksburg. The story says that the publication referred to the creature as “some kind of unknown bird or monster.” In an interesting twist, there is a second photograph on the Internet that displays the exact same scene, but is known to be faked.

The picture is not as convincing, but was made to look similar to the original for a television show named Freaky Links, which aired on the Fox network. The fake picture shows soldiers standing over a different carcass.

The image is deceiving and the fact that there are two photographs that show the same thing has discredited the original. Whatever the case, the picture remains an interesting story. Today, Thunderbirds are one of the most popular cryptids in North America.

Evidence suggests the picture is real

A number of our readers have contacted us – many of the comments can be seen below. They all recount similar stories, that this image was in circulation many years before the internet or photoshop existed.

Other persons have seen this photo in the middle of the 20th century, many years before the first version of Photoshop was developed. Why assume the opposite, that this photograph emerged after Photoshop was created? It’s not only contrary to what people say about it, but it’s against the evidence in the photo itself.