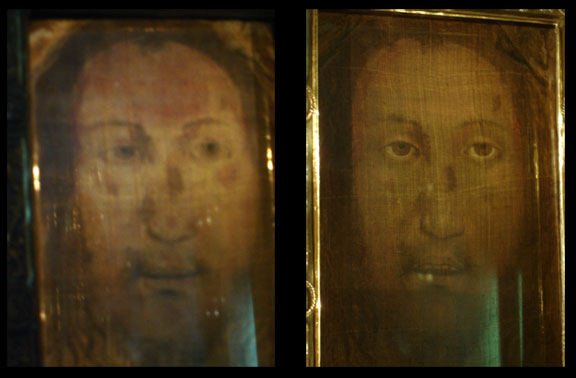 The TURIN SHROUD is not the only ancient artefact purporting to show a mysterious imprint of Christ’s features. Christian legend tells of a fabled, linen veil which also inexplicably shows the face of Jesus.

It is a cloth said to have miraculous healing powers and supernatural qualities. Just like the Turin Shroud, it is also the source of controversy. However, the veil has more intriguing mysteries surrounding it than just what caused the image. The Vatican claims it has been holding the cloth in its archive continuously since the twelfth century, but in 1999 an expert in Christian art history, who works for Vatican organisations, said he had found the real veil hidden in a remote Italian abbey. So what exactly is the world supposed to believe? When Christ was carrying his cross through Jerusalem on the way to being crucified at Cavalry, a woman stepped forward and used her veil to wipe the sweat and blood from His face. As a sign if gratitude, He left an image of his likeness stained on the cloth. Although this episode is not mentioned in the scriptures, legend says the woman’s name was Veronica. She is said to have kept the cloth and realised that it had holy healing powers. She took the veil to Rome where she used it to cure Emperor Tiberius of a malady, and then left it in the care of Pope Clement and the Catholic Church.

Historical records show that the veil was in Rome from at least the fourth century. In 1297 it was placed in the Vatican Basilica and was the subject of worship from pilgrims who believed the picture was indeed the genuine likeness of Christ. The image itself was almost identical to the face seen on the Turin Shroud. In 1608 the area of the Basilica displaying the veil was demolished in order to be redesigned, and the cloth was placed in the Vatican’s archives. Under tight security, it was brought out once a year for public viewing. Or so Catholics believed. On 3rd June 1999, a professor of Christian art history at the Vatican’s Gregorian University, and official advisor to the Papal Commission for the Cultural History of the Church, revealed he had successfully completed a 13-year investigation to find the real Veil of Veronica. A German Jesuit,
Heinrich Pfeiffer explained that the artefact annually displayed was merely a copy that the Vatican had created so as not to disappoint pilgrims. He claimed to have actually found the true relic in an abbey in the tiny village of Monopello, high in the Italian Apennine mountains. Records in the village’s monastery revealed that the wife of a jailed soldier stole the veil in 1608, and sold it to a Monopellan nobleman to release her husband from prison. The nobleman gave it to the abbey’s Capuchin monks, who have kept it in the monastery and revered it as a sacred icon ever since. The veil Pfeiffer found is an almost transparent cloth 6.7 inches wide and 9.4 inches long. The dark red image on it depicts a bearded man with long hair and open eyes.

There are also red drop marks, which are believed to be blood. The picture itself seems to appear and disappear in different light – a quality that Pfeiffer says would have been viewed as supernatural in less advanced times. Pfeiffer also revealed that ultraviolet testing confirmed that veil the image was not created by paint, and the image has been infused identically on both sides.

copy of the Turin Shroud?

Sceptics are not convinced. They believe the extremely thin nature of the cloth allowed the image to seep through to be the same on each side. Many believe the similarities between the veil and the Turin Shroud occur because the veil was a deliberate copy of the larger cloth. They also point out the fact that Veronica’s meeting with Christ has never been historically documented, and her name itself is a work of fiction – being an amalgamation of the Latin words for ‘true image’, or ‘vera-icon’. The only scientific way of determining the age of the cloth is by carbon dating, but its brittle, delicate state means it could be irreparably damaged during any such tests. For Pfeiffer there is no doubt about the religious authenticity of the veil, and he is entirely convinced that his find is the true artefact. But for other Catholics, it is not so easy. Even if they accept the legend, which veil do they chose as the genuine relic?

More strange things you should read

Facts about the Turin shroud