Allegedly, in the fall of 1943 a U.S. Navy destroyer was made invisible and teleported from Philadelphia, Pennsylvania, to Norfolk, Virginia, in an incident known as the Philadelphia Experiment. Records in the Operational Archives Branch of the Naval Historical Center have been repeatedly searched, but no documents have been located which confirm the event, or any interest by the Navy in attempting such an achievement.

The ship involved in the experiment was supposedly the USS Eldridge. Operational Archives has reviewed the deck log and war diary from Eldridge’s commissioning on 27 August 1943 at the New York Navy Yard through December 1943. The following description of Eldridge’s activities are summarized from the ship’s war diary. After commissioning, Eldridge remained in New York and in the Long Island Sound until 16 September when it sailed to Bermuda. From 18 September, the ship was in the vicinity of Bermuda undergoing training and sea trials until 15 October when Eldridge left in a convoy for New York where the convoy entered on 18 October. Eldridge remained in New York harbor until 1 November when it was part of the escort for Convoy UGS-23 (New York Section).

On 2 November the convoy entered Naval Operating Base, Norfolk. On 3 November, Eldridge and Convoy UGS-23 left for Casablanca where it arrived on 22 November. On 29 November, Eldridge left as one of escorts for Convoy GUS-22 and arrived with the convoy on 17 December at New York harbor. Eldridge remained in New York on availability training and in Block Island Sound until 31 December when it steamed to Norfolk with four other ships. During this time frame, Eldridge was never in Philadelphia.

However, new evidence has come to light that could suggest the official version is incorrect.

On October 28, 1943, an experiment was conducted at the Philadelphia Navy Yard. This event, appropriately enough, became known as “The Philadelphia Experiment”.

A Navy escort destroyer named the DE 173 (better known as the U.S.S. Eldridge), with hundreds of tons of electronic equipment aboard, lay in its dock. Scientists on shore started the experiment which involved Dr. Albert Einstein’s “Unified Field Theory”, a completed version appearing in the period 1925-27. “Withdrawn” as incomplete, the revised theory returned in 1940. The result of the experiment was brain-rattling!

Then, after a few minutes (another account makes that “seconds”), the ship reappeared where it had formerly been, to its Philadelphia dock, and regained its visibility! But that was not all. Something equally stunning was discovered to have happened during its vanishment.

During that period of a few minutes (or seconds) the ship had shown up at its other Norfolk Navy Yard dock in Virginia! So, not only had it successfully become invisible, but it had also been TELEPORTED!

With the ship’s disappearance, so had everything aboard disappeared. EVERYTHING! The many hundreds of tons of scientific equipment, furniture, food, etc. – and ALL PERSONNEL SUCH AS SAILORS AND OFFICERS!

SOME WALKED THROUGH SOLID WALLS!

More than half of them went insane due to the effects of pulsating energy fields and were quietly confined to mental institutions. Our report has it that “they were kept at Bethesda Naval Hospital out of communication with everybody for the duration of the war.”
Then there were those who, discharged as mentally unfit for further service, were pensioned off and sworn to secrecy. Several died. Others recovered, but at what a price.

Never were they to regain their former normalcy. True, the invisibility experiment fo the Navy ship was a total success, but to the men aboard, severe after-effects both physical and mental made it a real disaster.

Some saw double, became invisible, laughed and staggered drunkenly, fainted, caught on fire to burn for days on end, walked through solid walls, disappeared temporarily and permanently, and worse. 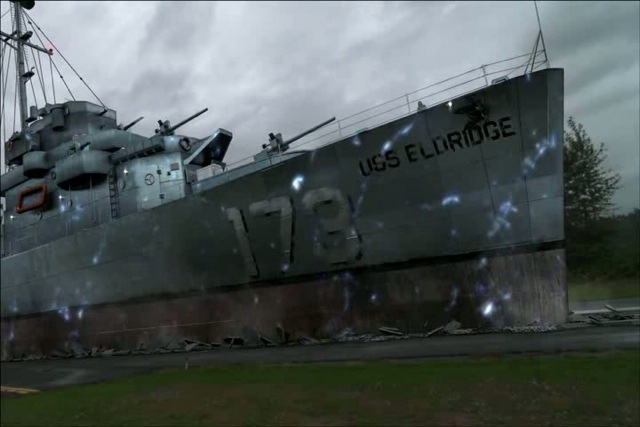