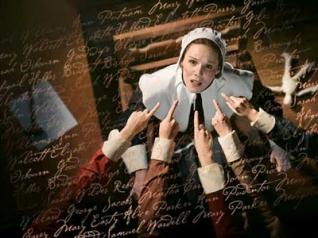 The Salem witch trials occurred in colonial Massachusetts from 1692 until 1693.

The unusual actions of three young children sparked a series of inquisitions and executions unlike any ever experienced before or afterwards in America. So fantastic was the event and consequences of the trials, that they are still remembered over three hundred years later.

The whole scenario was prompted by the actions of three young girls. The girls suddenly began to display strange behavior. The unusual behavior included convulsive seizures, screaming obscenities, throwing objects, and uttering unusual and peculiar sounds. Doctors were called in to examine the girls. After careful examination, the doctors could not find any physical reasons for the actions. Europe and colonial American both had strong religious beliefs that taught that the devil gave supernatural power to his followers, and that the followers of the devil could at will control the actions of other people. With this mind set, the Puritan communities of Massachusetts came to the overwhelming conclusion that their colony had become overran with witches.

With this sentiment running amuck, officials started pressuring the young girls to reveal the names of the witches that had the girls under their control. After much questioning, the girls named a slave, a homeless beggar, and an elderly woman. The elderly woman and beggar both adamantly denied the charges, but the slave confessed. This ignited the great witch hunt. All three women were taken into custody, and other witches were sought. The girls were once again pressured to give more names. The girls accused a prominent church member. The community was stunned that witchery had infiltrated even the core of the church. The woman was brought before the officials for trial. The girls were brought in for the questioning. The girls began to imitate every movement or action that the woman did. If she bit her lip during questioning, the three girls would cry out in pain and would also be biting their lips. If the accused shuffled her feet, the girls would also make the same movements. Others in the assembly began to complain of not being in control of their movements and suffering from unexplained pains. This brought a swift verdict of witchy to the devoted church member.

tions and trials continued and led to over 200 people being accused of being practicing witches. Some of the accused were as young as four years old. Nineteen people were executed by being hung from the neck, and one person was executed by being crushed under rocks. Several other people died while in custody awaiting trial. After close family members of officials began to be accused, it was decided that it would be better to allow practicing witches to run free than to unintentionally execute one innocent person. With this new direction of thinking, the colonial governor disbanded the inquiry being conducted by the local court.

Suspected paranormal events seem to permeate from the area. Buildings and other locations associated with the witch trial have an extensive history of being haunted. One location known as Gallows Hill has been the site for strange events and hauntings since the time of the executions. Observers are convinced that it is the persons condemned as witches that haunt the site. Saint Mary’s Cemetery is known for strange noises and a fast moving, glowing light that moves about the cemetery. The cemetery is also documented to have an overwhelming feeling of evilness. The feeling of evilness is contributed to the negative energy from the hauntings. Numerous homes and buildings that are associated with the events or persons of the trials are documented to be haunted by people that played major roles in the events.

The Salem witch trials occurred from a misunderstanding of the actions of children. The Puritans’’ belief of supernatural power being given to followers of the devil seemed to be the mostly likely answer to a problem that seemed to have no answer. The sad outcome of the witchery inquiry has led to countless reports and tales of hauntings, ghost sitings, and paranormal occurrences. As with any significant event, the people and happenings will live on through the retelling of the tale and the hauntings that the event invokes.