We love a good true crime story here at cool interesting stuff, and the freaky case of Dr. Carl Tanzler is one of the best.

In the 1920’s, Carl Tanzler (later known as Carl von Cosel) emigrated from Germany to the the Florida Keys, in the United States, leaving behind a wife and two young daughters.

Tanzer had worked as an x-ray technician and inventor in Germany, barely making enough to get by, but upon arrival in the US, he claimed to be a former submarine skipper and owner of nine college degrees.

In 1934, he found employment at a Key West hospital in the tuberculosis ward. Shortly after, he brought his family to join him in Florida, but he soon separated from his wife after she discovered his wild claims of holding 9 degrees.

Elena Hoyos, a 22 year old Hispanic, (who was both beautiful and a former Cuban entertainer) was admitted to the hospital. Von Cosel (as he was now called) working as a ward technician, was soon captivated, despite her rebuffs of his advances.

The hospital staff became dubious, but with his nine ‘degrees’ and ocassional eccentric brilliance, they let him continue with his strange ideas on Elena, knowing they could do nothing themselves to save her.

Von Cosel got permission from her family to build Elena a mausoleum. There, Von Cosel used formaldehyde and other chemicals and spices to preserve the body, secretly visiting it nightly.

He had a key made that no one but her sister knew about.

The Hoyos’s trusted Von Cosel and since he seemed to love her in life (even though it was an unrequited love), they were understanding of his fondness for visiting her grave.

They did not know he was inside attempting to preserve Elena.

Von Cosel paid for and built an above-ground burial vault which included a telephone so that he could communicate with her and a strange airship whose function he refused to state.

During these nightly visits, he would talk to Elena’s corpse and said later that one night he saw her ghost in the mausoleum. He claimed she appeared to him from that time after every night and they would have long conversations and she expressed her love for him.

These nocturmal visitations continuted for two years until he lost his job at the hospital and moved to a remote shack.

But he wasn’t alone in his shack, for he had stolen Elena’s body from the mausoleum!

There he placed her body on a large bed, enough to sleep two, curtained with a cloth veil. He continued his work on her decaying body as the chemicals could only delay her body from mouldering for so long. He rubbed her entire body with strange oils and chemicals and then later had to reconstruct parts of her face with morticians wax to reform her features. He later admitted to spending long pleasant nights talking to her and professing his love.

Elenas sister began to suspect something was amiss. She notified the authorities and they searched her mausoleum only to find it empty.

Elena’s sister instantly knew who had taken her sister’s body and found Von Cosel’s shack and confronted him. He kindly invited her inside, and to her horror, she saw what appeared be a wax dummy in the likeness of Elena laying on the bed. He told her that he and Elena were happy and in love and invited her to come back again and visit.

The sister was livid and horrified and went to the police.

They came and took what they assumed to be a dummy to the local morgue to be autopsied. The “dummy” was actually the long decayed corpse of Elena Hoyos; her bones held together with piano wire, her skin had been treated with wax, her eye sockets filled with glass replacements, and she’d been perfumed to mask the odor of decomposition.

This was terrible enough, but what the investigators found next was truly repulsive.

Von cosel had reconstructed many parts of her body, her eyes, nose, and most disturbingly, her vagina to which he added a tube that permitted sexual intercourse. He had been having sexual intercourse with the corpse of Elena Hoyos for as many as eight years! 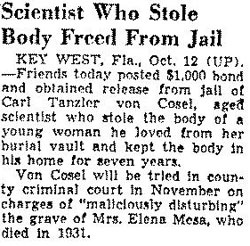